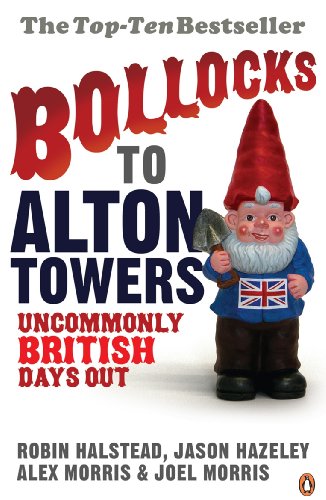 In Stock
£4.99
Taking a journey across the country, our intrepid heroes discovered dinosaurs in South London, a cold war castle in Essex, grown men pretending to be warships in Scarborough, unexplained tunnels under Liverpool and a terraced house in Bedford being kept warm for Jesus' return.
Very Good Good
8 in stock

The British Lawnmower Museum, Keith Harding's World of Mechanical Music and Mad Jack's Sugar Loaf. In a world of theme parks, interactive exhibits, over-priced merchandise and queues, don't worry, these are names to stir the soul. Reassuring evidence that there's still somewhere to turn in search of the small, fascinating, unique and, dammit, British.

In a stumbling journey across the country in search of the best we have to offer our intrepid heroes discovered dinosaurs in South London, a cold war castle in Essex, grown men pretending to be warships in Scarborough, unexplained tunnels under Liverpool and a terraced house in Bedford being kept warm for Jesus's return. And along the way they met the people behind them all: enthusiasts, eccentrics and, you know, those who just sort of fell into looking after a vast collection of gnomes ...

GOR000414683
Bollocks to Alton Towers: Uncommonly British Days Out by Alex Morris
Alex Morris
Bollocks to Alton Towers
Used - Very Good
Paperback
Penguin Books Ltd
2006-03-02
448
0141021209
9780141021201
N/A
Book picture is for illustrative purposes only, actual binding, cover or edition may vary.
This is a used book - there is no escaping the fact it has been read by someone else and it will show signs of wear and previous use. Overall we expect it to be in very good condition, but if you are not entirely satisfied please get in touch with us.