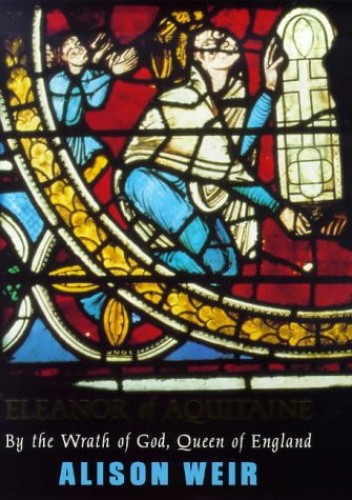 Eleanor of Aquitaine
by Alison Weir

In Stock
£5.99
A fresh and provocative biography of Eleanor of Aquitaine, one of the most controversial personalities of the Middle Ages. Married in turn to Louis VII of France and Henry II of England, she was mother of Richard the Lionheart and King John. She lived to be 82 and became virtual ruler of England.
Very Good
8 in stock

Eleanor of Aquitaine: By the Wrath of God, Queen of England by Alison Weir

Eleanor of Aquitaine was a remarkable woman. She was an important factor in the reign of four kings, lived to the ripe old age of 82, bore 10 children and outlived all but two of them. Her sons were kings of England and her daughters queens of Castile and Sicily, while her later descendants included a Holy Roman emperor and kings of France and Spain, as well as a couple of saints. In an age of men, she was indeed a powerful woman.
Born in 1122 into the sophisticated and cultured court of Poitiers, Eleanor of Aquitaine came of age in a world of luxury, bloody combat, and unbridled ambition. At only fifteen, she inherited one of the great fortunes of Europe - the prize duchy of Aquitaine - yet was forced to submit to a union with the handsome but sexually withholding Louis VII, the teenage king of France. The marriage endured for fifteen fraught years, until Eleanor finally succeeded in having it annulled - only to enter an even stormier match with Henry of Anjou, who would soon ascend to the English throne as Henry II.
With astonishing historic detail, mesmerizing pageantry, and irresistible accounts of royal scandal and intrigue, Weir re-creates not only a remarkable personality, but a magnificent past era. As Weir traces the fascinating intersection of public and private lives in Europe's twelfth-century courts, Eleanor comes to life as a complex, boldly original woman who transcended the mores of society. Later, after sixteen years of imprisonment for plotting to overthrow Henry, the humbled Queen emerged, at age sixty-seven, to rule England.

"Her biography reads like a medieval romance, a marvellous intermingling of fact with legend--fascinating-- splendid." - "Literary Review"

GOR001121293
Eleanor of Aquitaine: By the Wrath of God, Queen of England by Alison Weir
Alison Weir
Used - Very Good
Hardback
Vintage Publishing
1999-09-30
464
0224044249
9780224044240
Winner of Good Book Guide Awards: Biography 2000
Book picture is for illustrative purposes only, actual binding, cover or edition may vary.
This is a used book - there is no escaping the fact it has been read by someone else and it will show signs of wear and previous use. Overall we expect it to be in very good condition, but if you are not entirely satisfied please get in touch with us.