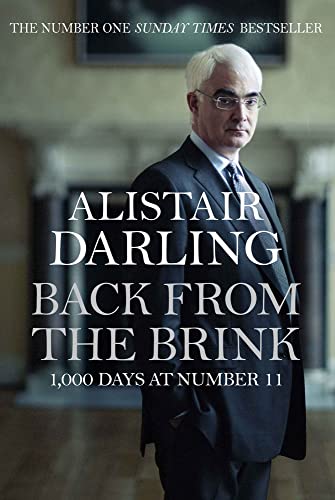 Back from the Brink by Alistair Darling

Alistair Darling's long-awaited book will be one of the most reviewed, widely discussed and saleable political memoirs of recent years.

Back from the Brink: 1000 Days at Number 11 by Alistair Darling

In the late summer of 2007, shares of Northern Rock went into free-fall, causing a run on the bank - the first in over 150 years. Northern Rock proved to be only the first. Twelve months later, as the world was engulfed in the worst banking crisis for more than a century, one of its largest banks, RBS, came within hours of collapse.

Back from the Brink tells the gripping story of Alistair Darling's one thousand days in Number 11 Downing Street. As Chancellor, he had to avert the collapse of RBS hours before the cash machines would have ceased to function; at the eleventh hour, he stopped Barclays from acquiring Lehman Brothers in order to protect UK taxpayers; he used anti-terror legislation to stop Icelandic banks from withdrawing funds from Britain. From crisis talks in Washington, to dramatic meetings with the titans of international banking, to dealing with the massive political and economic fallout in the UK, Darling places the reader in the rooms where the destinies of millions weighed heavily on the shoulders of a few. His book is also a candid account of life in the Downing Street pressure cooker and his relationship with Gordon Brown during the last years of New Labour.

Back from the Brink is a vivid and immediate depiction of the British government's handling of an unprecedented global financial catastrophe. Alistair Darling's knowledge and understanding provide a unique perspective on the events that rocked international capitalism. It is also a vital historical document.

Alistair Darling is the Member of Parliament for Edinburgh South West. Initially appointed as Chief Secretary to the Treasury in 1997, he moved to become Secretary of State for Work and Pensions in 1998. He spent another four years as Secretary of State for Transport, also becoming Secretary of State for Scotland in 2003. He served as Secretary of State for Trade and Industry in 2006, before Gordon Brown promoted him to Chancellor in 2007, a post he held until the change of government in May 2010.
GOR003263421
9780857892799
0857892797
Back from the Brink: 1000 Days at Number 11 by Alistair Darling
Alistair Darling
Used - Very Good
Hardback
Atlantic Books
2011-09-01
352
N/A
Book picture is for illustrative purposes only, actual binding, cover or edition may vary.
This is a used book - there is no escaping the fact it has been read by someone else and it will show signs of wear and previous use. Overall we expect it to be in very good condition, but if you are not entirely satisfied please get in touch with us
Trustpilot