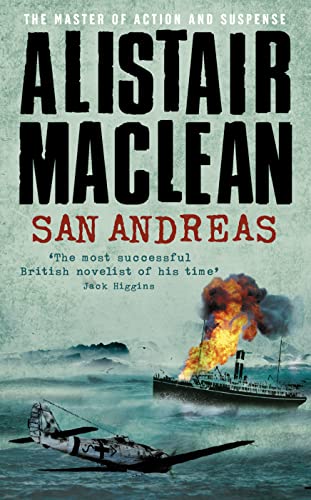 Reissue of the classic tale of war at sea, from the acclaimed master of action and suspense.

Reissue of the classic tale of war at sea, from the acclaimed master of action and suspense.

Suddenly, just before dawn, the lights went out aboard the San Andreas. For the British hospital ship sailing the deadly, U-boat patrolled Norwegian waters, a nightmare of violence and betrayal has begun. A terrifying game of sabotage in which an unknown traitor among the crew holds all the cards.

The red crosses on the vessel's sides spell anything but safety. For a dangerous secret has turned the ship into a priceless quarry.

With the Captain out of action Bosun Archie McKinnon takes over. Alone in treacherous, frozen seas, her compass smashed, the San Andreas is being drawn relentlessly into the enemy's hands.

`The novel of a great entertainer...Every bit as good as HMS Ulysses' Eric Hiscock

GOR000731449
San Andreas by Alistair MacLean
Alistair MacLean
Used - Very Good
Paperback
HarperCollins Publishers
1994-04-22
384
0006170269
9780006170266
N/A
Book picture is for illustrative purposes only, actual binding, cover or edition may vary.
This is a used book - there is no escaping the fact it has been read by someone else and it will show signs of wear and previous use. Overall we expect it to be in very good condition, but if you are not entirely satisfied please get in touch with us.