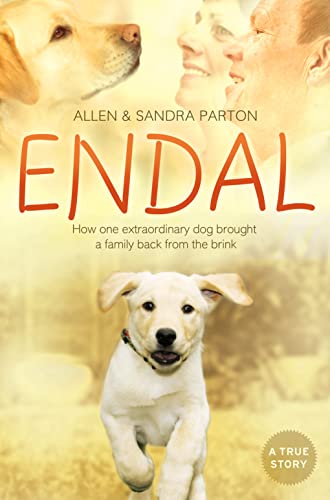 Endal: How one extraordinary dog brought a family back from the brink by Allen Parton

Allen Parton was seriously injured while serving in the Gulf War. He lost the use of both of his legs, plus all memories of his children and much of his marriage. He was left unable to walk, talk or write - isolated in his own world. After five years of intensive therapy and rehab, he was still angry, bitter and unable to talk. Until a chance encounter with a Labrador puppy - Endal - who had failed his training as an assistance dog on health grounds. They 'adopted' each other, and Endal became Allen's reason to communicate with the outside world, to come to terms with his injuries, and to want to live again. Not content with learning over 200 commands to help Allen complete everyday tasks like getting dressed and going out to the shops in his wheelchair, Endal gave Allen the ability to start living again, and to become a husband and father again in his own special way. This is the incredible story of Allen, his wife Sandra, and his family. And, of course, Endal.

`Endal is a true dog hero: kind, intelligent, incredibly resourceful, very funny and utterly devoted to his master Allen Parton [...] this is one of the great uplifting dog stories.'
Jilly Cooper

'The pointy heads at the Admirality should read this, hang their heads in shame - then get a dog.'
Daily Mail

Allen Parton was serving in the Gulf War when an accident robbed him of the use of his legs and half of his long-term and short-term memory. After 5 years in hospital, he was still unable to walk, talk, read or write. It was only when he was partnered up with his Canine Partner, Endal, that he found the strength to learn to communicate with the world again. As his aide with everyday tasks, Endal allows Allen to lead an independent life. Endal has been given many awards, including the PDSA Gold Award and Dog of the Millenium award. Allen and Endal currently work with a number of animal and disability charities.

GOR001227363
9780007303007
0007303009
Endal: How one extraordinary dog brought a family back from the brink by Allen Parton
Allen Parton
Used - Very Good
Paperback
HarperCollins Publishers
2009-02-05
320
N/A
Book picture is for illustrative purposes only, actual binding, cover or edition may vary.
This is a used book - there is no escaping the fact it has been read by someone else and it will show signs of wear and previous use. Overall we expect it to be in very good condition, but if you are not entirely satisfied please get in touch with us
Trustpilot