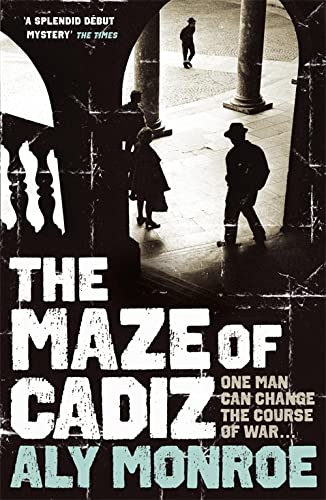 The Maze of Cadiz
by Aly Monroe

The Maze of Cadiz Summary

The Maze of Cadiz: Peter Cotton Thriller 1: The first thriller in this gripping espionage series by Aly Monroe

'Atmospheric and surprising' The Sunday Times

Spain, September 1944. The war in Europe is drawing to a close; formerly neutral Franco is edging closer to the Allies. Peter Cotton, a young Intelligence officer, is sent to investigate the activities.

On his arrival, Cotton learns that a fellow British agent, May, has been found dead. May had spent much of the war in the remote outpost of Cadiz, monitoring the Spanish smuggling of raw materials to aid the Axis war efforts. But in the months leading up to his death he had severed all contacts with his London controllers.

Cotton travels to Cadiz where he must work with sinister local police inspector Ramirez to investigate May's death. But they are not the only ones with an interest in May. Cadiz is a hotbed of rumours and shifting political alliances. And what Cotton discovers amid the stifling heat and dust could just tilt the emerging balance of post-war power.

Customer Reviews - The Maze of Cadiz

The Maze of Cadiz Reviews

'Accomplished crime-writing debut...atmospheric and surprising', * Sunday Times (Culture), Joan Smith *
"Very moving...plot is intriguing" * New Books *
'The Maze of Cadiz is a splendid debut mystery ... Monroe provides terrific and convincing historical atmosphere; I am delighted that she is writing more Peter Cotton novels' * Marcel Berlins, The Times *
'Aly Monroe has created an impressive novel with an extraordinary, dream-like atmosphere ... only the first of a series of novels about him. The next can't come too soon.' * Natasha Cooper, Financial Times *
'Aly Monroe is a newcomer to crime writing, whose accomplished debut, The Maze of Cadiz, is set in 1944 ... Monroe's portrait of Cadiz in the aftermath of the civil war is atmospheric, and in a surprising twist the mild-mannered Cotton turns out to be as devious as his adversaries' * Joan Smith, The Sunday Times *
'Cotton's investigating is clever and fascinating' * Matthew Lewin, Guardian *
'Addictive' * Sunday Telegraph *
'Her writing is skilful and evocative...The Maze of Cadiz is a stylish and impressive debut' * The Economist *
'Intelligent spy tale with little action and lots of intrigue ... very atmospheric' * Bookseller *
'The slow pace of this novel is deliberate and perfectly authentic as it captures the Spanish approach to life ... a joy to read and a real page turner' * Eurocrime *
'I have been quite captivated ...The book had me totally convinced that Ms Monroe knows her Spain and, more to the point, knows the Spain of 1944 ...wonderfully atmospheric, very well-written' * Mike Ripley, Shots *
'Fans of convoluted espionage fiction will find much joy in this, the first instalment of a promising new series' * Mat Coward, Morning Star *
'First-time novelist Aly Monroe brilliantly evokes the atmosphere of the southern Spanish seaport...this is the first in a promised series of Peter Cotton novels. I can't wait for the next' * Birmingham Mail *
'Monroe lines up an array of strong and picturesque characters' * Edward James, Historical Novels Review *
'It is extremely well written, involving, clever, emotional and satisfying - a debut novel of the very highest promise' * Nick Hay, Reviewing the Evidence *
'Monroe writes in an intriguing way that is not always easy to follow but does seduce the reader to keep turning the pages' * Dover Express & Folkstone Herald *
'In Aly Monroe's memorable thriller, British agent Peter Cotton arrives in the port to investigate the death of a fellow intelligence officer and immediately finds himself in danger' * Waterstone's Books Quarterly *
'Monroe's eye for character and the general atmosphere of the book make it an entertaining read' * The Fiction Desk (online) *
"Very moving...plot is intriguing" * New Books *
'Highly recommended' * www.mysterywomen.co.uk *

Aly Monroe was born and educated in England. Trained in linguistics, she has lived abroad - mostly in Spain - and speaks several languages. She is married and has three children. The first three books in the Peter Cotton series, Maze of Cadiz and Washington Shadow and Icelight (winner of the 2012 Ellis Peters Historical Fiction Award) are also available from Hodder & Stoughton. You can find out more about Peter Cotton and Aly Monroe via her website, www.alymonroe.com or at www.hodder.co.uk, through her official facebook page at http://www.facebook.com/Monroe.Aly, and you can follow her on Twitter at www.twitter.com/monroe_aly.

GOR001475641
The Maze of Cadiz: Peter Cotton Thriller 1: The first thriller in this gripping espionage series by Aly Monroe
Aly Monroe
Used - Very Good
Paperback
Hodder & Stoughton General Division
2009-09-17
304
1848540329
9781848540323
N/A
Book picture is for illustrative purposes only, actual binding, cover or edition may vary.
This is a used book - there is no escaping the fact it has been read by someone else and it will show signs of wear and previous use. Overall we expect it to be in very good condition, but if you are not entirely satisfied please get in touch with us.