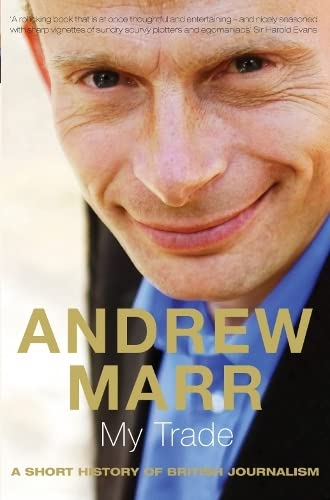 My Trade
by Andrew Marr

In Stock
£4.49
A journalistic memoir from one of the most recognisable TV news correspondents in the UK
Very Good
7 in stock

My Trade: A Short History of British Journalism by Andrew Marr

How do you decide what is a 'story' and what isn't? What does a newspaper editor actually do all day? How do hacks get their scoops? How do the TV stations choose their news bulletins? How do you persuade people to say those awful, embarassing things? Who earns what? How do journalists manage to look in the mirror after the way they sometimes behave?

The purpose of this insider's account is to provide an answer to all these questions and more. Andrew Marr's brilliant, and brilliantly funny, book is a guide to those of us who read newspapers, or who listen to and watch news bulletins but want to know more. Andrew Marr tells the story of modern journalism through his own experience.

This is an extremely readable and utterly unique modern social history of British journalism, with all its odd glamour, smashed hopes and future possibility.

Andrew Marr was born in Glasgow. He graduated from Cambridge University and has enjoyed a long career in political journalism, working for the Scotsman, the Independent , the Economist, the Express , and the Observer before being appointed as the BBC's political editor in May 2000. He is also the presenter of Start the Week. Andrew Marr's broadcasting includes series on contemporary thinkers for BBC 2 and Radio 4, and political documentaries for Channel 4 and BBC Panorama. He has had major prizes from the British Press Awards, the Royal Television Society and Bafta, among others. He lives in London.

GOR001139265
My Trade: A Short History of British Journalism by Andrew Marr
Andrew Marr
Used - Very Good
Paperback
Pan Macmillan
2005-07-01
432
0330411926
9780330411929
N/A
Book picture is for illustrative purposes only, actual binding, cover or edition may vary.
This is a used book - there is no escaping the fact it has been read by someone else and it will show signs of wear and previous use. Overall we expect it to be in very good condition, but if you are not entirely satisfied please get in touch with us.