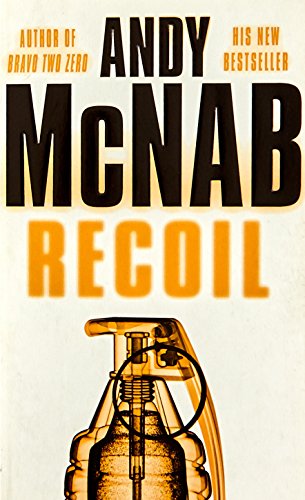 In Stock
£4.49
Recuperating in Switzerland after a job that cost the life of one of his closest friends, ex-deniable operator Nick Stone is looking for a quiet life.But when his private life starts to disintegrate, Nick is reluctantly forced back into action.
Like New Very Good
Only 3 left

Recuperating in Switzerland after a job that cost the life of one of his closest friends, ex-deniable operator Nick Stone is looking for a quiet life. But when his private life starts to disintegrate, Nick is reluctantly forced back into action. The trail leads him to Africa and the Democratic Republic of the Congo, where it isn't long before his dark past comes knocking on his door. . . Recoil is another pulsating example of modern thriller writing at its very best: compelling, authentic and utterly real. McNab has worked for many years behind the headlines and he knows only too well what makes them...

"McNab's great asset is that the heart of his fiction is not fiction: other thriller writers do their research, but he has actually been there." * Sunday Times *
"A terrific, first rate thriller by the man who was once the British Army's most highly decorated soldier." * Daily Mail *
"McNab is a terrific novelist. When it comes to thrills, he's Forsyth class." * Mail on Sunday *
"Addictive...Packed with wild action and revealing tradecraft." * Daily Telegraph *

GOR009123521
Recoil: (Nick Stone Thriller 9) by Andy McNab
Andy McNab
Nick Stone
Used - Like New
Paperback
Transworld Publishers Ltd
2007-06-18
528
055215377X
9780552153775
N/A
Book picture is for illustrative purposes only, actual binding, cover or edition may vary.
The book has been read, but looks new. The book cover has no visible wear, and the dust jacket is included if applicable. No missing or damaged pages, no tears, possible very minimal creasing, no underlining or highlighting of text, and no writing in the margins.