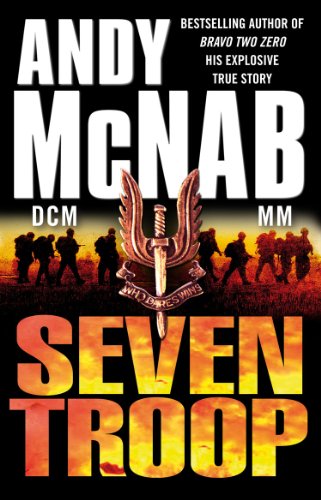 In Stock
£3.99
The links they forged then bound them inextricably together, but the things they saw and did during that time would take them all to breaking point - and some beyond - in the years that were to follow.
Very Good
9 in stock

They were like a band of brothers... In 1983 Andy McNab was assigned to B Squadron, one of the four Sabre Squadrons of the SAS, and within it to Air Troop, otherwise known as SEVEN TROOP. This is Andy McNab's gripping account of the time he served in the company of a remarkable group of men - from the day, freshly badged, he joined them in the Malayan jungle, to the day, ten years later, that he handed in his sand-coloured beret and started a new life. The links they forged then bound them inextricably together, but the things they saw and did during that time would take them all to breaking point - and some beyond - in the years that were to follow. He who dares doesn't always win...

"Paying tribute to the soldiers he served with for 10 years, he tells the poignant story of five brave men of whom, tragically, he is the only one still alive. *****" * News of the World *
"The SAS hero dishes up another helping of gripping memoir" * Good Book Guide *

GOR001099541
Seven Troop by Andy McNab
Andy McNab
Used - Very Good
Paperback
Transworld Publishers Ltd
2009-06-18
512
0552158666
9780552158664
N/A
Book picture is for illustrative purposes only, actual binding, cover or edition may vary.
This is a used book - there is no escaping the fact it has been read by someone else and it will show signs of wear and previous use. Overall we expect it to be in very good condition, but if you are not entirely satisfied please get in touch with us.