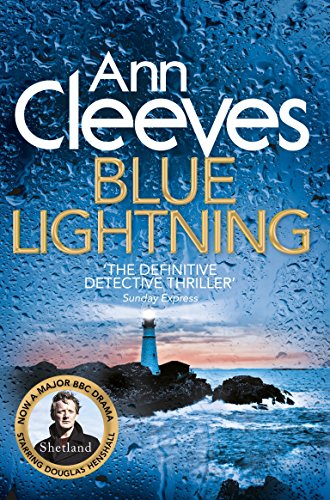 With the autumn storms raging, Fair Isle feels cut off from the rest of the world. Trapped, tension is high and tempers become frayed. Enough to drive someone to murder . . .

A woman's body is discovered at the renowned Fair Isles bird observatory, with feathers threaded through her hair. The islanders react with fear and anger. Detective Jimmy Perez has no support from the mainland and must investigate the old-fashioned way. He soon realizes that this is no crime of passion - but a murder of cold and calculated intention.

There's no way off the island until the storms abate - and so the killer is also trapped, just waiting for the opportunity to strike again.

Ann Cleeves worked as a probation officer, bird observatory cook and auxiliary coastguard before she started writing. She now promotes reading as Harrogate Crime-Writing Festival's reader in residence, and is also a member of 'Murder Squad', working with other northern writers to promote crime fiction. In 2006 Ann was awarded the Duncan Lawrie Dagger (CWA Gold Dagger) for Best Crime Novel, for Raven Black, the first book in her Shetland series. Some of her other novels include the popular Vera Stanhope series, The Crow Trap,Telling Tales, Hidden Depths, Silent Voices, The Glass Room, Harbour Street and The Moth Catcher. In 2012 she was inducted into the CWA Crime Thriller Awards Hall of Fame. Ann lives in North Tyneside.

GOR007063751
Blue Lightning by Ann Cleeves
Ann Cleeves
Shetland
Used - Very Good
Paperback
Pan Macmillan
2015-07-02
384
1447274474
9781447274476
N/A
Book picture is for illustrative purposes only, actual binding, cover or edition may vary.
This is a used book - there is no escaping the fact it has been read by someone else and it will show signs of wear and previous use. Overall we expect it to be in very good condition, but if you are not entirely satisfied please get in touch with us.