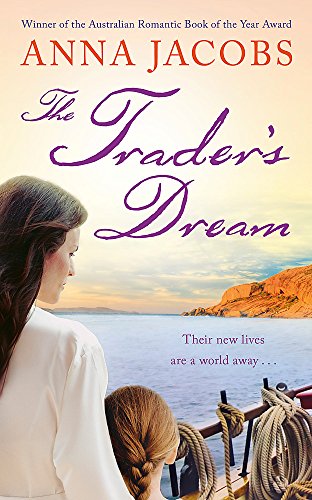 The Trader's Dream
by Anna Jacobs

The Trader's Dream by Anna Jacobs

Bram Deagan dreams of bringing his family from Ireland to join him in Australia, where he now runs a successful trading business.

But when a typhus epidemic strikes Ireland, it leaves the Deagan family decimated. And, with other family members scattered round the world, it is left to Maura Deagan to look after her orphaned nieces and nephew.

Forced to abandon her own ambitions, and unsure whether she is ready to become a mother-figure to three young children, Maura recognises that their only hope is to join Bram in far away Australia. So they set sail on the SS Delta, which will carry them there via the newly opened Suez Canal.

It is only when a storm throws her and fellow passenger Hugh Beaufort together that Maura realises this journey may also give her a chance to pursue a dream she set aside long ago - to have a family of her own. That is, until someone from Hugh's past threatens to jeopardise everything . . .

'This story has something happening on every page...great characters and the ensemble of secondary characters flow easily with some quite complicated plots flowing well around the central story.' * Australian Romance Readers Association on THE TRADER'S SISTER *
'A compelling read' * Sun on FREEDOM'S LAND *
Impressive grasp of human emotions. * The Sunday Times *
Anna Jacobs' books are deservedly popular. She is one of the best writers of Lancashire sagas around. * Historical Novels Review *
Jacobs excels at creating vivid, memorable characters. * Booklist USA *
Vivid insight into family relationships * Coventry Evening Telegraph *
'A gripping storyteller.' * Sunday Star Times, Auckland, NZ *
This is a fascinating insight into a piece of Australia's history that receives little attention. * Newcastle Herald, Australia on FREEDOM'S LAND *

GOR004765193
The Trader's Dream by Anna Jacobs
Anna Jacobs
The Traders
Used - Very Good
Paperback
Hodder & Stoughton General Division
2013-03-28
432
1444711326
9781444711325
N/A
Book picture is for illustrative purposes only, actual binding, cover or edition may vary.
This is a used book - there is no escaping the fact it has been read by someone else and it will show signs of wear and previous use. Overall we expect it to be in very good condition, but if you are not entirely satisfied please get in touch with us.