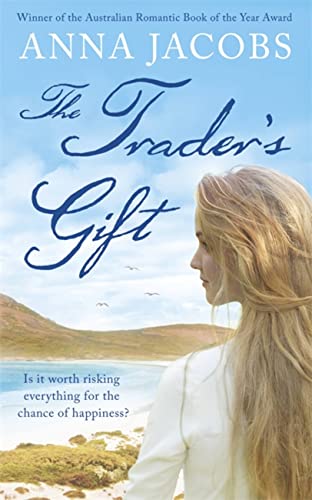 The Trader's Gift
by Anna Jacobs

The Trader's Gift by Anna Jacobs

Bram Deagan has a thriving trading business, a growing family - and a gift for matchmaking. His dearest wish is to see his friends Dougal and Mitchell happily married too.

In England, Eleanor Prescott has been widowed and often thinks of Dougal McBride, the ship's captain who was a true friend to her. Does she dare return to Western Australia to find him?

Jacinta Blacklea is also a widow, desperate to protect her young son. When she hears of a man in Australia looking for a wife, she determines to grasp Mitchell Nash's invitation with both hands. But the troubles of her old life can't be easily left behind.

Both Eleanor and Jacinta bravely set off for Australia. But is it worth taking such a huge risk on the chance of happiness?

'This story has something happening on every page...great characters and the ensemble of secondary characters flow easily with some quite complicated plots flowing well around the central story.' * Australian Romance Readers Association on THE TRADER'S SISTER *
'A compelling read' * Sun on FREEDOM'S LAND *
Impressive grasp of human emotions. * The Sunday Times *
Anna Jacobs' books are deservedly popular. She is one of the best writers of Lancashire sagas around. * Historical Novels Review *
Jacobs excels at creating vivid, memorable characters. * Booklist USA *
'A gripping storyteller.' * Sunday Star Times, Auckland, NZ *
This is a fascinating insight into a piece of Australia's history that receives little attention. * Newcastle Herald, Australia on FREEDOM'S LAND *

GOR010644031
The Trader's Gift by Anna Jacobs
Anna Jacobs
The Traders
Used - Like New
Paperback
Hodder & Stoughton General Division
2014-01-16
400
1444761269
9781444761269
N/A
Book picture is for illustrative purposes only, actual binding, cover or edition may vary.
The book has been read, but looks new. The book cover has no visible wear, and the dust jacket is included if applicable. No missing or damaged pages, no tears, possible very minimal creasing, no underlining or highlighting of text, and no writing in the margins.