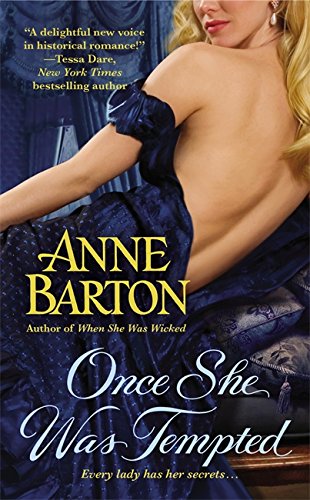 Once She Was Tempted
by Anne Barton

In Stock
£3.59
A second sexy regency romance from award winning author Anne Barton that will appeal to fans of New York Times bestselling authors Elizabeth Hoyt and Sarah MacLean.
Like New
Only 1 left

Once She Was Tempted Summary

Once She Was Tempted: Number 2 in series by Anne Barton

Annabelle isn't the only Honeycote familiar with scandal. Her sweet little sister Daphne isn't so innocent after all, and if her secret is revealed the whole Honeycote family could face ruin.

Before Daphne was a Duke's sister-in-law, she was a simple girl with a very sick mother. To help pay for their mounting medical bills, lovely Daphne agreed to pose for two very beautiful - but very scandalous - paintings. She was assured that the portraits would be part of a private collection and would never ben seen in public.

But now, two short years later, everything has changed. Daphne is making her debut into London society and one of the portraits has fallen into the possession of Benjamin Elliot, the notoriously stern Earl of Foxburn. When Foxburn meets Daphne he recognizes her instantly. And though normally he wouldn't care about the secrets of a silly debutant, Daphne has captured the attentions of Foxburn's young ward. Convinced Daphne is an improper choice for a wife, but not wanting to disappoint his ward, Foxburn offers her a deal: if she agrees to discourage his ward, he'll locate the other painting, return both to Daphne, and keep her secret.

But soon Foxburn has his own secret to keep: he too has fallen in love with Daphne. And he'll do anything it takes to win her love.

Once She Was Tempted Reviews

WHEN SHE WAS WICKED: "Sensual and solid, this debut is a story demanding to be read. The characters are believable and relatable, and Barton smartly blends issues of morality and Regency era social class with passion and excitement."--Publisher's Weekly (Starred Review) on When She Was Wicked
RAVE REVIEWS FOR ONCE SHE WAS TEMPTED "Anne Barton is a delightful new voice in historical romance! Once She Was Tempted is a charming read, with characters who are easy to love--a wounded earl and a determined heroine whose heart won't be denied."--Tessa Dare, New York Times bestselling author
"When She Was Wicked is a delightful debut! Anne Barton's cast of characters is charming and witty. Owen is the type of hero that readers fall in love with from the very first introduction, and Anabelle is ingenious and resourcefully cunning--a girl after my own heart."--Tiffany Clare on When She Was Wicked
"Break out the bubbly for Anne Barton's delightful debut!"--Vicky Dreiling, award-winning author on When She Was Wicked
"Stunning and heart melting...When She Was Wicked is a beautifully written regency Romance that I fell deeply in love with! Anne Barton has succeeded in writing the perfect debut. This is a must read that you do not want to miss!"--harlequinjunkie.com on When She Was Wicked
"4 stars! Delightfully smart, fun, fast-paced and just different enough for readers to take note of Barton's charming voice, this novel is filled with wry humor and compassion intrigues readers. The intrepid heroine, arrogant hero, memorable secondary characters and the colorful depiction of the era add to the reading enjoyment"--RT Book Reviews on When She Was Wicked
"Barton follows up When She Was Wicked with a delightful tale filled with sexual sizzle and banter. ...Barton's strong prose and wit will have readers clamoring for more."
-RT Book Reviews
"Fans of historical romance, especially books by Tessa Dare and Grace Burrowes, will enjoy Barton, who is proving to be an enticing new voice."
--Booklist

Anne Barton began swiping romance novels off her mom's bookshelf as a teenager, so when she had the chance to spend a semester in London-home to her favorite heroes-she packed her bags and promptly fell in love with the city, its history, and its pubs. She dreamed of writing romance, but somehow ended up a software analyst instead.

Fortunately, a few years and a few careers later, Anne found her way back to writing the stories she loves and in 2011 won the Romance Writers of America's Golden Heart (R) for Regency Historical Romance. She lives in Maryland with her husband (who, sadly, is not a peer of the realm-but a great guy nonetheless) and her three children, who try valiantly not to roll their eyes whenever she quotes Jane Austen. Her weaknesses include reality TV, cute-but-impractical shoes, and caffeinated beverages of all kinds.

GOR010558752
Once She Was Tempted: Number 2 in series by Anne Barton
Anne Barton
Honeycote Novel
Used - Like New
Paperback
Little, Brown & Company
2013-10-31
384
145551330X
9781455513307
N/A
Book picture is for illustrative purposes only, actual binding, cover or edition may vary.
The book has been read, but looks new. The book cover has no visible wear, and the dust jacket is included if applicable. No missing or damaged pages, no tears, possible very minimal creasing, no underlining or highlighting of text, and no writing in the margins.