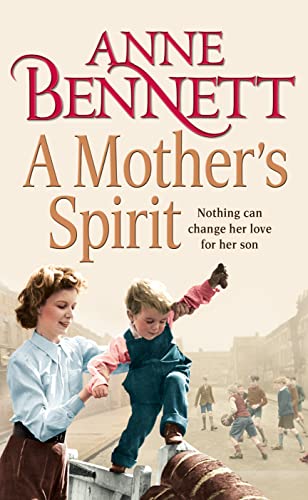 A Mother's Spirit
by Anne Bennett

From rural rags to brief riches and back to ruin, this is a moving saga of hard work, bad luck and finally hope for a family's future.

A Mother's Spirit by Anne Bennett

From rural rags to brief riches and back to ruin, this is a moving saga of hard work, bad luck and finally hope for a family's future.

Gloria Sullivan can't quite believe where she has ended up.

Growing up with no money worries, she fell head over heels in love with the handsome, hardworking Irishman employed by her father. They were the golden couple - until the Wall Street crash, when everything was lost. Finally she agreed to start again in London with husband Joe and their small son.

World War Two was raging, and Joe laboured on the docks by day and fighting fires by night. He was a hero - but one dreadful fire left him terribly injured. Once more Gloria resolved to leave everything behind and to take Joe home to his family farm in Ireland, his only hope of recovery.

Gloria now dutifully nurses her husband, but she can't settle in the countryside. Then a nearby American base begins recruiting civilians. Gloria tells everyone it's her chance to do her bit - but will she be tempted to do much more?

`A powerful, heart-wrenching saga from the much-loved author of "Daughter of Mine" and "Danny Boy"...This ["Mother's Only Child"] is a page-turning saga of love, loss and family ties' Woman's Weekly

`A brilliant story and very gripping...Anne Bennett really brings the characters to life. It's a great read. You won't be able to put the book down' Yours

GOR000859540
A Mother's Spirit by Anne Bennett
Anne Bennett
Used - Very Good
Paperback
HarperCollins Publishers
2009-03-05
432
0007226063
9780007226061
N/A
Book picture is for illustrative purposes only, actual binding, cover or edition may vary.
This is a used book - there is no escaping the fact it has been read by someone else and it will show signs of wear and previous use. Overall we expect it to be in very good condition, but if you are not entirely satisfied please get in touch with us.