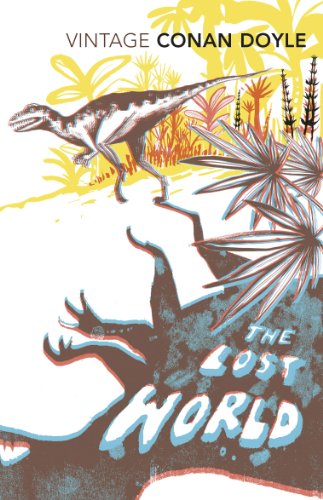 Used Price
5,99 £
New RRP 7,99 £
Free Shipping in the UK
The notorious Professor Challenger claims that dinosaurs still walk the earth. On a remote plateau in the middle of impenetrable jungle, they discover the impossible truth, but must battle monsters and men before they can bring their testimony home.
Reviews:
Trustpilot
Very Good

The notorious Professor Challenger claims that dinosaurs still walk the earth. When the press and the scientific community ridicule him, Challenger vows to show them proof. And so he sets off for South America, accompanied by a big game hunter, a scientist and a young reporter eager to impress the woman he loves. On a remote plateau in the middle of impenetrable jungle, they discover the impossible truth, but must battle monsters and men before they can bring their testimony home.

Sir Arthur Conan Doyle was born on 22 May 1859 in Edinburgh. He studied medicine at the University of Edinburgh and began to write stories while he was a student.Over his life he produced more than thirty books, 150 short stories, poems, plays and essays across a wide range of genres.His most famous creation is the detective Sherlock Holmes, who he introduced in his first novel A Study in Scarlet (1887). This was followed in 1889 by an historical novel, Micah Clarke. In 1893 Conan Doyle published 'The Final Problem' in which he killed off his famous detective so that he could turn his attention more towards historical fiction. However Holmes was so popular that Conan Doyle eventually relented and published The Hound of the Baskervilles in 1901. The events of the The Hound of the Baskervilles are set before those of 'The Final Problem' but in 1903 new Sherlock Holmes stories began to appear that revealed that the detective had not died after all. He was finally retired in 1927. Sir Arthur Conan Doyle died on 7 July 1930.

GOR003935821
The Lost World by Arthur Conan Doyle
Arthur Conan Doyle
Used - Very Good
Paperback
Vintage Publishing
2011-05-05
256
0099528525
9780099528524
N/A
Book picture is for illustrative purposes only, actual binding, cover or edition may vary.
This is a used book - there is no escaping the fact it has been read by someone else and it will show signs of wear and previous use. Overall we expect it to be in very good condition, but if you are not entirely satisfied please get in touch with us.