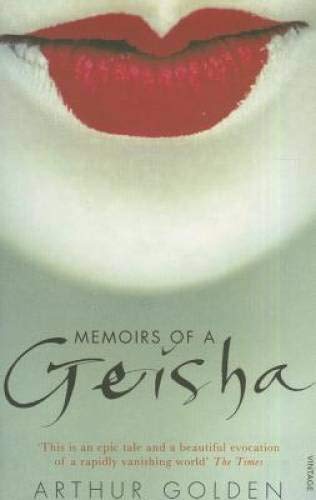 Memoirs Of A Geisha
by Arthur Golden

Used Price
£2.99
New RRP £9.99
Free Shipping in the UK
Her memoirs conjure up the perfection and the ugliness of life behind rice-paper screens, where young girls learn the arts of geisha - dancing and singing, how to wind the kimono, how to walk and pour tea, and how to beguile the land's most powerful men.
Very Good Well Read

Memoirs Of A Geisha Summary

Memoirs Of A Geisha by Arthur Golden

This story is a rare and utterly engaging experience. It tells the extraordinary story of a geisha -summoning up a quarter century from 1929 to the post-war years of Japan's dramatic history, and opening a window into a half-hidden world of eroticism and enchantment, exploitation and degradation. A young peasant girl is sold as servant and apprentice to a renowned geisha house. She tells her story many years later from the Waldorf Astoria in New York. Her memoirs conjure up the perfection and the ugliness of life behind rice-paper screens, where young girls learn the arts of geisha - dancing and singing, how to wind the kimono, how to walk and pour tea, and how to beguile the land's most powerful men.

Memoirs Of A Geisha Reviews

"An epic tale and a beautiful evocation of a rapidly vanishing world" * The Times *
"The sort of novel that novel-lovers yearn for, which is to say, so convincing that while reading it you become transported to another time, another place, and feel you are listening and seeing with someone else's ears and eyes" -- Margaret Forster
"Endlessly fascinating...a narrative that is both gripping and beautifully paced...a wonderful read" * Observer *
"Sayuri's memoirs reveal Golden to have great gifts of imaginative empathy...fascinating" * Independent *
"This is one of those rare novels that evokes a vanished world with absolute conviction and in every detail... This book is exceptional" * Daily Mail *

Arthur Golden was born and brought up in Chattanooga, Tennessee. He is a 1978 graduate of Harvard College with a degree in art history, specialising in Japanese art. In 1980 he earned an MA in Japanese history from Columbia University where he also learned Mandarin Chinese. After a summer at Beijing University, he went to work at a magazing in Tokyo. In 1988 he recieved an MA in English from Boston University. He has lived and worked in Japan, and since that time has been teaching writing and literature in the Boston area. He now lives in Brookline, Massachusetts, with his wife and children

GOR003100724
Memoirs Of A Geisha by Arthur Golden
Arthur Golden
Used - Very Good
Paperback
Vintage Publishing
1998-06-04
512
0099771519
9780099771517
Winner of Whitaker Gold Book Award 2001 Runner-up for The BBC Big Read Top 100 2003 Short-listed for BBC Big Read Top 100 2003
Book picture is for illustrative purposes only, actual binding, cover or edition may vary.
This is a used book - there is no escaping the fact it has been read by someone else and it will show signs of wear and previous use. Overall we expect it to be in very good condition, but if you are not entirely satisfied please get in touch with us.