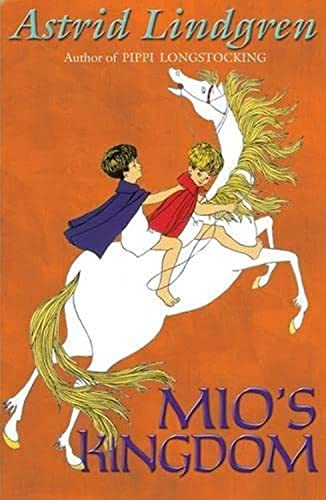 In Stock
£6.99
After a chance meeting with a genie in the park, young Karl travels to Farawayland where he learns that his true name is Mio, and that his real father is the king. There he receives the love that he craved, but never had, from his foster parents back in Stockholm. But an evil tyrant terrorizes the land, and Mio is the one who must save the kingdom.
Very Good Good
7 in stock

Did you hear the news about a boy who disappeared? No one knows what happened to him . . . except me. Young Karl leaves behind his unhappy life as an unwanted foster child to escape to Farawayland. There, he learns that his true name is Mio, and that he is the son of the king. But the kingdom is under threat. The evil Sir Kato terrorizes the land, and it has been foretold that Mio is the only one who can defeat him . . . Originally published in Swedish in 1954, Astrid Lindgren's tale of Mio became a worldwide children's classic. It is celebrated in this heritage edition, complete with a new and faithful English translation.

a true classic that works for every generation. Highly recommended * Amazon reviewer *
I adored Astrid Lindgren as a child * Francesca Simon, author of the Horrid Henry books *

Astrid Lindgren was born in Sweden in 1907. During the course of her life she wrote over 40 books for children. She once commented: 'I write to amuse the child within me, and can only hope that other children may have some fun that way too.' Many of her stories are based upon her memories of childhood, and filled with lively and unconventional characters. Perhaps the best known is Pippi Longstocking, first published in Sweden in 1945. It was an immediate success with children, and was later published in England in 1954. During her lifetime, Lindgren was awarded dozens of Swedish and international prizes for her writing, among them the prestigious Hans Christian Andersen medal in 1958: widely considered the ultimate accolade for an author of children's books. In 1989 a theme park dedicated to her - Astrid Lindgren's World - was opened in the author's home town of Vimmerby. She died in 2002.

GOR003645618
Mio's Kingdom by Astrid Lindgren
Astrid Lindgren
Used - Very Good
Paperback
Oxford University Press
2011-07-07
144
0192731971
9780192731975
N/A
Book picture is for illustrative purposes only, actual binding, cover or edition may vary.
This is a used book - there is no escaping the fact it has been read by someone else and it will show signs of wear and previous use. Overall we expect it to be in very good condition, but if you are not entirely satisfied please get in touch with us.