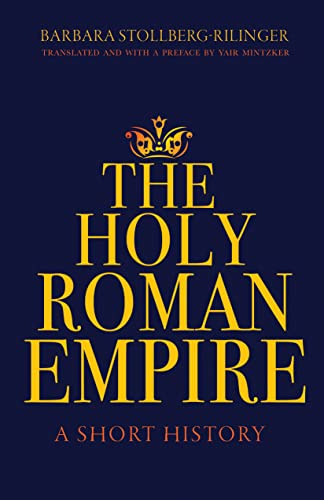 The Holy Roman Empire: A Short History by Barbara Stollberg-Rilinger

The Holy Roman Empire emerged in the Middle Ages as a loosely integrated union of German states and city-states under the supreme rule of an emperor. Around 1500, it took on a more formal structure with the establishment of powerful institutions-such as the Reichstag and Imperial Chamber Court-that would endure more or less intact until the empire's dissolution by Napoleon in 1806. Barbara Stollberg-Rilinger provides a concise history of the Holy Roman Empire, presenting an entirely new interpretation of the empire's political culture and remarkably durable institutions.

Rather than comparing the empire to modern states or associations like the European Union, Stollberg-Rilinger shows how it was a political body unlike any other-it had no standing army, no clear boundaries, no general taxation or bureaucracy. She describes a heterogeneous association based on tradition and shared purpose, bound together by personal loyalty and reciprocity, and constantly reenacted by solemn rituals. In a narrative spanning three turbulent centuries, she takes readers from the reform era at the dawn of the sixteenth century to the crisis of the Reformation, from the consolidation of the Peace of Augsburg to the destructive fury of the Thirty Years' War, from the conflict between Austria and Prussia to the empire's downfall in the age of the French Revolution.

Authoritative and accessible, The Holy Roman Empire is an incomparable introduction to this momentous period in the history of Europe.

"Barbara Stollberg-Rilinger, one of Germany's leading historians, provides an elegant, succinct, and thought-provoking account of that most baffling of states, the Holy Roman Empire. Her distinctive and novel approach balances the recent, more positive assessment of the empire as a functioning political structure with an innovative interpretation of its conservative political culture. Readers are given a clear explanation of why it overcame some problems and not others, and why it ended in 1806."-Peter H. Wilson, author of Heart of Europe: A History of the Holy Roman Empire
"This important book advances a new interpretation of the Holy Roman Empire that promises to free analyses of the empire's inner workings from the burdens of contemporary political memory. Stollberg-Rilinger makes the imperial political system, endlessly complex though it was, accessible and comprehensible to a wider audience."-David M. Luebke, author of Hometown Religion: Regimes of Coexistence in Early Modern Westphalia

Barbara Stollberg-Rilinger is professor and chair of early modern history at the University of Munster in Germany. Her many books include her acclaimed biography of Maria Theresa, which won Germany's prestigious Leipzig Book Fair Prize in 2017, and The Emperor's Old Clothes: Constitutional History and the Symbolic Language of the Holy Roman Empire. Yair Mintzker is professor of history at Princeton University. His books include The Many Deaths of Jew Suss: The Notorious Trial and Execution of an Eighteenth-Century Court Jew (Princeton).

GOR009948260
The Holy Roman Empire: A Short History by Barbara Stollberg-Rilinger
Barbara Stollberg-Rilinger
Used - Very Good
Hardback
Princeton University Press
2018-09-25
184
0691179115
9780691179117
N/A
Book picture is for illustrative purposes only, actual binding, cover or edition may vary.
This is a used book - there is no escaping the fact it has been read by someone else and it will show signs of wear and previous use. Overall we expect it to be in very good condition, but if you are not entirely satisfied please get in touch with us.