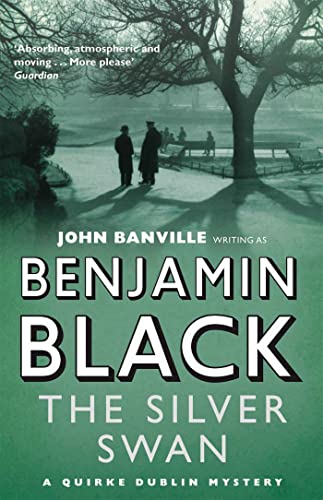 The Silver Swan
by Benjamin Black

The Silver Swan by Benjamin Black

Time has moved on for Quirke, the world-weary pathologist first encountered in Christine Falls. It is the middle of the 1950s, that low, dishonourable decade; a woman he loved has died, a man he once admired is dying, while the daughter he for so long denied is still finding it hard to accept him as her father. When an old acquaintance approaches him about his wife's apparent suicide, Quirke recognizes trouble but, as always, trouble is something he cannot resist.

`Drug addiction, morbid sexual obsession, blackmail and murder, as well as prose as crisp as a winter's morning by the Liffey . . . Quirke is human enough to swell the hardest of hearts' GQ

`The death of Michael Dibdin left a huge hole in crime fiction. Black and Quirke are filling that gap with this wholly gripping account for the shady, priest-ridden and blithely corrupt society of mid-twentieth-century Dublin' Daily Mail

`A romp of a read, a compelling fix' Scotsman

Benjamin Black is the pen name of acclaimed author John Banville, who was born in Wexford, Ireland, in 1945. His novels have won numerous awards, including the Man Booker Prize in 2005 for The Sea. He lives in Dublin.

GOR001291268
The Silver Swan by Benjamin Black
Benjamin Black
Quirke Mysteries
Used - Very Good
Paperback
Pan Macmillan
2008-10-27
368
0330454080
9780330454087
Short-listed for Irish Book Awards: RTE Radio 1's The Tubridy Show Listeners' Choice Award 2008 Short-listed for Hughes & Hughes Irish Novel of the Year Award 2008
Book picture is for illustrative purposes only, actual binding, cover or edition may vary.
This is a used book - there is no escaping the fact it has been read by someone else and it will show signs of wear and previous use. Overall we expect it to be in very good condition, but if you are not entirely satisfied please get in touch with us.