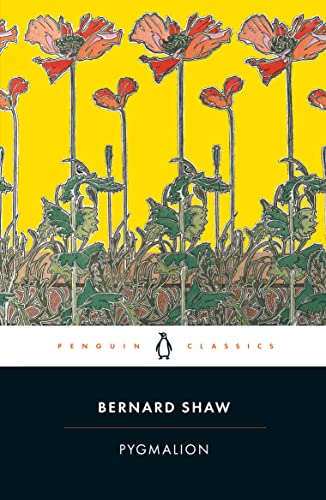 In Stock
£2.39
Shaw's dramatization of a Cockney flower girl's metamorphosis into a lady is both a fantasy and a platform for his views on social class, money and women's independence.
Very Good Good Well Read
15 in stock

Pygmalion both delighted and scandalized its first audiences in 1914. A brilliantly witty reworking of the classical tale of the sculptor Pygmalion, who falls in love with his perfect female statue, it is also a barbed attack on the British class system and a statement of Shaw's feminist views. In Shaw's hands, the phoneticist Henry Higgins is the Pygmalion figure who believes he can transform Eliza Doolittle, a cockney flower girl, into a duchess at ease in polite society. The one thing he overlooks is that his 'creation' has a mind of her own. Adapted into the Oscar-winning musical film My Fair Lady starring Audrey Hepburn and Rex Harrison in 1964, Pygmalion

This is the definitive text produced under the editorial supervision of Dan H. Laurence, with an illuminating introduction by Nicholas Grene, discussing the language and politics of the play. Also included in this volume is Shaw's preface, as well as his 'sequel' written for the first publication in 1916, to rebut public demand for a more conventially romantic ending.

Although essentially shy, Dublin-born George Bernard Shaw (1856-1950) created the persona of GBS, the showman, satirist, conversationalist, critic, pundit, wit, intellectual buffoon and dramatist. Commentators brought a new adjective into English: 'Shavian', a term used to embody all his brilliant qualities. Deeply concerned by what he saw as the exploitation of the working class, Shaw was an active Socialist and a brilliant platform speaker. He remains the only person ever to have been awarded both the Nobel Prize in Literature and an Oscar.

If you enjoyed Pygmalion, you might like Oscar Wilde's The Picture of Dorian Gray, also available in Penguin Classics.

"[Shaw] did his best in redressing the fateful unbalance between truth and reality, in lifting mankind to a higher rung of social maturity. He often pointed a scornful finger at human frailty, but his jests were never at the expense of humanity." --Thomas Mann

"Shaw will not allow complacency; he hates second-hand opinions; he attacks fashion; he continually challenges and unsettles, questioning and provoking us even when he is making us laugh. And he is still at it. No clich or truism of contemporary life is safe from him." --Michael Holroyd

"In his works Shaw left us his mind. . . . Today we have no Shavian wizard to awaken us with clarity and paradox, and the loss to our national intelligence is immense." --The Sunday Times


"He was a Tolstoy with jokes, a modern Dr. Johnson, a universal genius who on his own modest reckoning put even Shakespeare in the shade." --The Independent

"His plays were superb exercises in high-level argument on every issue under the sun, from feminism and God, to war and eternity, but they were also hits--and still are." --The Daily Mail

Dublin-born George Bernard Shaw (1856-1950) was an active Socialist and a brilliant platform speaker. He was strongly critical of London theatre and closely associated with the intellectual revival of British drama.
Dan H. Laurence has edited Shaw's COLLECTED LETTERS and COLLECTED PLAYS with their Prefaces. He was Literary Advisor to the Shaw Estate until his retirement in 1990.
Nicholas Grene is Professor of English at the University of Dublin.

GOR001159498
Pygmalion by George Bernard Shaw
George Bernard Shaw
Used - Very Good
Paperback
Penguin Books Ltd
2003-01-30
144
0141439505
9780141439501
N/A
Book picture is for illustrative purposes only, actual binding, cover or edition may vary.
This is a used book - there is no escaping the fact it has been read by someone else and it will show signs of wear and previous use. Overall we expect it to be in very good condition, but if you are not entirely satisfied please get in touch with us.