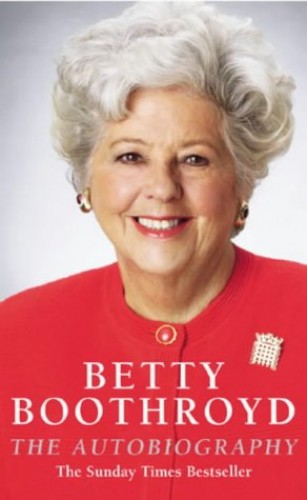 In Stock
£3.99
The enormous respect and affection of the British public for Betty Boothroyd has its roots in a strong belief in what she stands for: fair play, an unshakeable sense of honour and a passionate belief in the sovereignty of Parliament.
Very Good
11 in stock

The enormous respect and affection of the British public for Betty Boothroyd has its roots in a strong belief in what she stands for: fair play, an unshakeable sense of honour and a passionate belief in the sovereignty of Parliament. Her convictions, she has said, are set in 'Yorkshire granite'. Born into a working class family in Dewsbury in 1929, there was little money, but Betty grew up in a home that radiated love and warmth. Betty was popular and a talented dancer who eventually went on to become one of the celebrated Tiller Girls - the full story of which she tells here for the first time. But by the age of twenty-five, Betty's dreams of taking the West End by storm had crashed - and her father's ambition of seeing her settled with a nice safe job had been abandoned. Undaunted, she won a national speaking award, stood for election to the local council and became a full-time worker for the Labour Party. Nothing would ever part Betty Boothroyd from politics again. In 1953 Betty began work at the House of Commons for Barbara Castle and Geoffrey de Freitas. She speaks candidly about the devastation of losing two by-elections and the time she spent in America campaigning for JFK. Back in Britain, Betty landed a top job with millionaire Labour Minister Lord Harry Walston and the Yorkshire girl became part of the inner circle of the socialist elite, which included Hugh Gaitskell and Roy Jenkins. She describes the elation she felt on becoming an MP at last in 1973, the huge debt she owes her mother for her support, and the full story behind her role in the struggle to save the Labour Party from the hard left. Betty Boothroyd's long political career reached its apogee in 1992 when she was appointed the first woman Speaker of the House of Commons with overwhelming support from both sides of the House. Her term of office coincided with John Major's attempts to defend his slim majority. Detailing many of the true stories behind the headlines, she writes of the sleaze scandals that beset the Major government, her feelings when Labour won their landslide election in 1997 and her strongly held views on the role of Parliament. Finally, she tells why she decided to retire, her plans for the future and - in retrospect - what she feels about her decision to put public service above marriage.

"The first Speaker to become a political superstar - one of the most popular women in Britain" * Mail on Sunday *
"Betty Boothroyd is frank, fun and generous... an uncomplicated book by a straightforward lady" * William Hague, Sunday Telegraph *
"Betty Boothroyd came to transcend politics... her autobiography is of profound human interest" * Times Literary Supplement *

Betty Boothroyd was born in 1929, the daughter of a Yorkshire textile worker and weaver. In the mid-50s, after a career as a dancer with the Tiller Girls Troupe, she turned to politics. In 1973, after several unsuccessful attempts to enter parliament, she was finally selected as Labour MP for Bromwich, and served as an MEP from 1975 to 1977. In 1987 she became one of three deputy speakers in the House of Commons. But she is best known for becoming the first woman Speaker of the House of Commons, a post she held from 1992 to 2000. She was a popular choice, admired for her firmness, good-humour, fairness and ability to deal with a rowdy and mostly male House of Commons. Her straightforward, no-nonsense approach made her something of a celebrity. In 2001 she became a Life Peer and took her seat in the House of Lords as Baroness Boothroyd of Sandwell.

GOR000603295
Betty Boothroyd Autobiography by Betty Boothroyd
Betty Boothroyd
Used - Very Good
Paperback
Cornerstone
2002-10-03
544
0099427044
9780099427049
N/A
Book picture is for illustrative purposes only, actual binding, cover or edition may vary.
This is a used book - there is no escaping the fact it has been read by someone else and it will show signs of wear and previous use. Overall we expect it to be in very good condition, but if you are not entirely satisfied please get in touch with us.