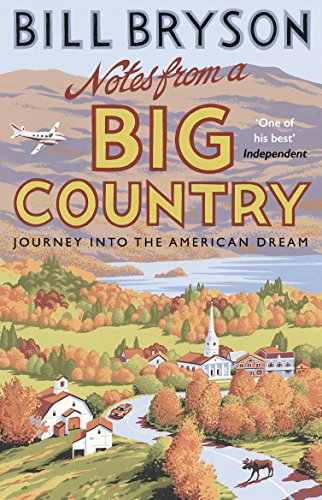 Notes From A Big Country
by Bill Bryson

Used Price
£4,79
New RRP £10,99
Free Shipping in the UK
The author has the rare knack of being out of his depth wherever he goes - even (perhaps especially) in the land of his birth. Whether discussing the strange appeal of breakfast pizza or the jaw-slackening direness of American TV, the author brings his brand of bemused wit to bear on that strangest of phenomena - the American way of life.
Reviews:
Trustpilot
Very Good

Notes From A Big Country Summary

Notes From A Big Country: Journey into the American Dream by Bill Bryson

Bill Bryson has the rare knack of being out of his depth wherever he goes - even (perhaps especially) in the land of his birth. This became all too apparent when, after nearly two decades in England, the world's best-loved travel writer upped sticks with Mrs Bryson, little Jimmy et al. and returned to live in the country he had left as a youth.

Of course there were things Bryson missed about Blighty but any sense of loss was countered by the joy of rediscovering some of the forgotten treasures of his childhood: the glories of a New England autumn; the pleasingly comical sight of oneself in shorts; and motel rooms where you can generally count on being awakened in the night by a piercing shriek and the sound of a female voice pleading, 'Put the gun down, Vinnie, I'll do anything you say.'

Whether discussing the strange appeal of breakfast pizza or the jaw-slackening direness of American TV, Bill Bryson brings his inimitable brand of bemused wit to bear on that strangest of phenomena - the American way of life.

Notes From A Big Country Reviews

One of his best books -- Scott Bradfield * Independent *
Delightful bite-size essays that exude affection while debunking the ridiculous with wonderful succinctness... This is not a book to be read in a single sitting. It is one to be savoured -- Martin Fletcher * The Times *
Bill Bryson's answer to Alistair Cooke's Letter From America...not only hilarious but also insightful and informative -- Jeremy Atiyah * Independent on Sunday *
Bryson is great when explaining the idiosyncracies of America to middle England and making it funny... He is both serious and contemtuously funny * Guardian *

GOR007898907
Notes From A Big Country: Journey into the American Dream by Bill Bryson
Bill Bryson
Bryson
Used - Very Good
Paperback
Transworld Publishers Ltd
2016-03-24
384
1784161845
9781784161842
N/A
Book picture is for illustrative purposes only, actual binding, cover or edition may vary.
This is a used book - there is no escaping the fact it has been read by someone else and it will show signs of wear and previous use. Overall we expect it to be in very good condition, but if you are not entirely satisfied please get in touch with us.