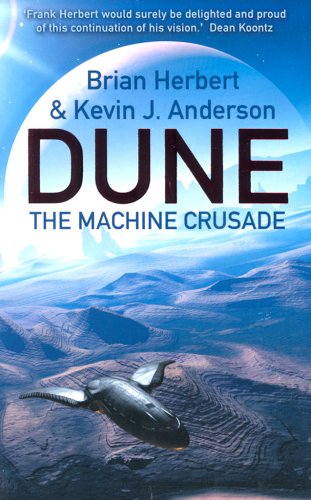 The Machine Crusade
by Brian Herbert

In The Machine Crusade the story of the battle between humans and the thinking machines continues from where it began in The Butlerian Jihad.

The first battle was a victory. But the war is just beginning . . .

The Machine Crusade: Legends of Dune 2 by Brian Herbert

Earth is a radioactive ruin. But the initial campaign of the Butlerian Jihad has given new hope to mankind. Serena Butler, whose murdered child has become a symbol for oppressed humanity, inspires a war against the thinking computers led by Xavier Harkonnen and Vorian Atreides.

But four of the Titans - murderous machines with human brains and human cunning - still remain. And the universal computer mind, Omnius, still wields most of its power.

'Congratulations to Herbert and Anderson for transporting us back to this richly excavated world...A spicy melange treat for both new and long-time fans of the series' Billy Dee Williams (of Star Wars, Lady Sings the Blues etc)
House Harkonnen is compulsive reading. I certainly enjoyed meeting pardot Kynes and Liet, learning more about the Freman, as well as Gurney Halleck, Duncan Idaho and the Lady Jessica. Such vile villains...and such a fascinating description of splendid places. * Anne McCaffrey on House Harkonnen *
Those who long to return to the world of desert, spice and sandworms will be amply satisfied * The Times *
'Brian Herbert and Kevin J Anderson succeed in weaving their own intricate saga. Dune: House Atreides does its predecessors justice.' USA Today
House Atreides is a terrific prequel, but it's also a first-rate adventure on its own. Frank Herbert would surely be delighted and proud of this continuation of his vision. * Dean Koontz *
'In writing a prequel to what is arguably the best science fiction novel of all time, Brian Herbert and Kevin J Anderson set themselves a monumental task. They succeed brilliantly. This cynical old critic found himself engrossed from page one, and eagerly looks forward to the rest of the series. Buy it now!' Dave Wolverton (NYT bestselling author)
'All these characters and themes will be familiar to fans of the original Dune novels. But new twists added by Herbert and Anderson will have fans, both old and new, turning pages. Having done their research well, Herbert and Anderson have succeeded in laying out the foundation for a new trilogy that will amplify the original novels and stand firmly as a class act in its own right.' - Dorman T Schindler, St Petersburg Times on HA
'This book is written in a style so close to the original that it is hard to believe Frank Herbert did not direct it through some mysterious genetic link - maybe he did. Did I like it? Hey, I'm a Dune addict myself. I can't wait for the sequel to the prequel' - Mark Graham, Rocky Mountain News on HA
...a rousing story that juggles eight or so plot lines with ease. The first of a trilogy, the book is written so that those who have never read Dune can strat right here with the prequel.' - Michael Glitz, New York Post on HA
'The author's research and passion for the material have served them well. Dune: House atreides captures the essence of Dune while illuminating further the workings of Frank Herbert's universe' - Seattle Times
'Dune: House Atreides is packed with action, great story lines and twists within twists about favorite Dune villains and heroes. The result is a winning combination that keeps the two in stride with Frank Herbert's vision.' - Beyond the Cover.
'...a compelling story that will transport readers back to the world that changed science fiction forever' - Tattered Times, Denver, Colarado
'In a word satisfying: all Dune fans will want to investigate, newcomers will be tempted, and it should promise fresh interest in the magnificent original series' - Kirkus
'. . . Herbert and Anderson have met the challenge admirably. Within a web of relationships in which no act has simple or predictable consequences, they lay the foundations of the Dune saga . . . Even readers new to the saga will be able to follow it easily as the narrative weaves among the many interconnected tales. A TERRIFIC READ IN ITS OWN RIGHT . . . Will inspire readers to turn, or return, to its great predecessor.' Publishers Weekly
'This trilogy stands alone...will appeal to Dune fans, and sci-fi addicts.' Bournemouth Daily Echo on THE MACHINE CRUSADE

GOR001024790
The Machine Crusade: Legends of Dune 2 by Brian Herbert
Brian Herbert
Used - Very Good
Paperback
Hodder & Stoughton General Division
2004-03-01
672
0340823356
9780340823354
N/A
Book picture is for illustrative purposes only, actual binding, cover or edition may vary.
This is a used book - there is no escaping the fact it has been read by someone else and it will show signs of wear and previous use. Overall we expect it to be in very good condition, but if you are not entirely satisfied please get in touch with us.