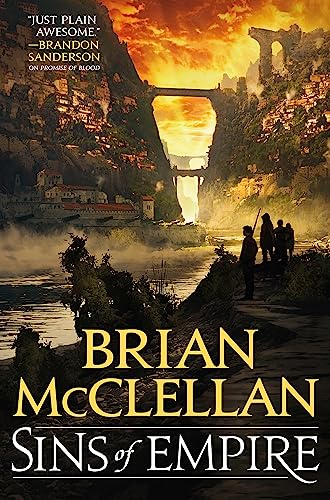 Sins of Empire
by Brian McClellan

The action-packed start to a thrilling new epic fantasy series from award-winning author Brian McClellan, set in the same world as the Powder Mage trilogy

Sins of Empire by Brian McClellan

'Crackles with excitement and adventure on every page' Fantasy Book Review

Enter a war-torn world where gunpowder and magic collide

The nation of Fatrasta is a haven for criminals, rebels, adventurers and sorcerers seeking relics of the past. As insurrection grows, only the iron will of the Lady Chancellor holds the capital city of Landfall together.

Yet an ancient power as old as time is rising, and the fate of this young nation now rests in the hands of a spy, a disgraced war hero and a mercenary general with a past as turbulent as Landfall's present.

Sins of Empire is the explosive new epic fantasy from Gemmell Award-winning author Brian McClellan. Look out for Wrath of Empire, book two in the Gods of Blood and Powder series, in May 2018.

Gods of Blood and Powder
Sins of Empire
Wrath of Empire

Brian McClellan is an American epic fantasy author from Cleveland, Ohio. He is known for his acclaimed Powder Mage series and essays on the life and business of being a writer. Brian now lives on the side of a mountain in Utah with his wife, Michele, where he writes books and nurses a crippling video game addiction.

GOR008237096
Sins of Empire by Brian McClellan
Brian McClellan
Gods of Blood and Powder
Used - Very Good
Paperback
Little, Brown Book Group
2017-03-09
640
035650929X
9780356509297
N/A
Book picture is for illustrative purposes only, actual binding, cover or edition may vary.
This is a used book - there is no escaping the fact it has been read by someone else and it will show signs of wear and previous use. Overall we expect it to be in very good condition, but if you are not entirely satisfied please get in touch with us.