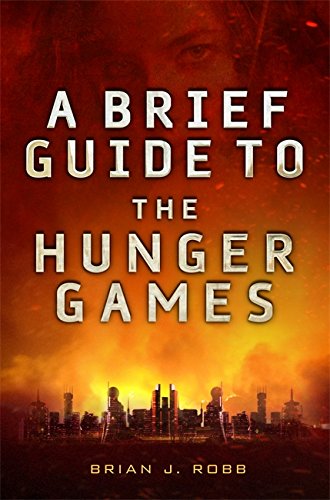 A Brief Guide To The Hunger Games
by Brian Robb

A Brief Guide To The Hunger Games Summary

A Brief Guide To The Hunger Games by Brian Robb

A comprehensive and compelling guide to Suzanne Collins's bestselling young-adult, dystopian trilogy The Hunger Games, Catching Fire and Mockingjay. Already a publishing phenomenon to rival Harry Potter (over 50 million copies sold), there are three sequels to the 2012 blockbuster movie of The Hunger Games scheduled for release between 2013 and 2015; Mockingjay Part 1 is due to be released in November 2014. Robb explores the inspiration behind the books, the author, the themes and influences of the three books, the movie adaptations and their cultural impact, the books' legacy and spin-offs.

Suzanne Collins has created a series of characters and situations that have struck a chord not only with the target audience of teenagers, but which have also drawn in adult readers, making the series second only to Harry Potter in National Public Radio's popular poll of the Top 100 Teen Novels.
Inspired when flicking TV channels between a reality television entertainment show and news footage of the war in Iraq, author Suzanne Collins conceived The Hunger Games as a parable for teen life and a warning of a dystopian future. Her parable incorporates Greek myth, Roman history and American entertainment.

As the daughter of a US Air Force Officer who served in the Vietnam War, Collins had a unique insight into military life. Starting in children's television on such shows as Clarissa Explains It All, Collins went on to write children's fiction in The Underland Chronicles (drawing inspiration from Alice in Wonderland) and the Charlie McButton illustrated books. However, it was The Hunger Games series that has changed her life, giving the author a series of New York Times bestsellers and seeing her listed as one of Time magazine's most influential people of 2010.

Robb explores themes in The Hunger Games, and the influences and inspirations that lie behind the books, highlighting where Suzanne Collins has drawn on mythology and history, reshaping them to fit her universe. He also examines the characters and situations created in the book and how these have impacted on the books' largely teen readership. He also looks at reactions to the books from fans and critics, both acclaim and criticisms faced by the author. He takes a look at the creativity of the fans who have drawn on Collins' work for their own takes on the world of The Hunger Games.
Robb chronicles the adaptation of The Hunger Games from acclaimed, best-selling novel to blockbusting film. With a script by Suzanne Collins herself, the film has made stars of Jennifer Lawrence as Collins' heroine Katniss Everdeen, Josh Hutcherson as Peeta Mellark and Liam Hemsworth as Gale Hawthorne. Following the making of the film, including quotes from the writer, director and stars, this chapter will examine the efforts taken to make a success of The Hunger Games on screen. It will also look at the cultural impact of the film and consider the critical reception it met upon release in March 2012.

With three more movies scheduled (Catching Fire is due to be released in November 2013) and Mockingjay will be made into two films to be released in 2014 and 2015), Robb looks at the future of The Hunger Games series on screen, with an emphasis on the second film, Catching Fire.
As with the Harry Potter series, The Hunger Games novels and films have inspired a host of spin-offs and extensions, from games and comic books to merchandise and new tales within the same universe. This chapter looks at these extensions of The Hunger Games franchise and analyses the effect Suzanne Collins work has had on the wider field of teen fiction and blockbuster movie-making.

GOR009322781
A Brief Guide To The Hunger Games by Brian Robb
Brian Robb
Brief Histories
Used - Very Good
Paperback
Little, Brown Book Group
2014-08-21
288
1472110587
9781472110589
N/A
Book picture is for illustrative purposes only, actual binding, cover or edition may vary.
This is a used book - there is no escaping the fact it has been read by someone else and it will show signs of wear and previous use. Overall we expect it to be in very good condition, but if you are not entirely satisfied please get in touch with us.