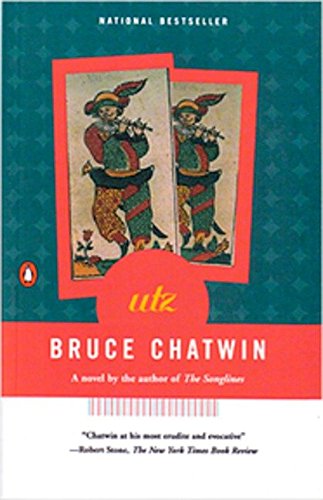 In Stock
£3.99
Kaspar Utz is a compulsive porcelain collector and silent rebel. Permitted to leave Czechoslovakia each year, he always returns since he cannot take his collection with him. For Kaspar Utz is as much a prisoner of the porcelain as he is of the Communist state.
Very Good Good
Only 3 left

An elegant novel set in Prague about the possibility of freedom in an unfree state, from the acclaimed author of The Songlines and In Patagonia

Utz collects Meissen porcelain with a passion. His collection, which he has protected and enlarged through both World War II and Czechoslovakia's years of Stalinism, numbers more than 1,000 pieces, all crammed into his two-room Prague flat.

Utz is allowed to leave the country each year, and although he has considered defection, he always returns. He cannot take his precious collection with him, but he cannot leave it, either. And so Utz is as much owned by his porcelain as it is owned by him, as much of a prisoner of the collection as of the Communist state.

A fascinating, enigmatic man, Kaspar Utz is one of Bruce Chatwin's finest creations. And his story, as delicately cast as one of Utz's porcelain figures, is unforgettable.

"Chatwin at his most erudite and evocative."--Robert Stone, The New York Times Book Review

"Utz wonderfully depicts that sad, romantic city of Prague, the ham-handedness of East European politics, a small gallery of deftly drawn characters. Chatwin's deepening portrait of Utz is cunningly achieved. . . . It is triumphant." --The Washington Post

"Chatwin's Prague is a palpable place. . . . The modeling is deft, the color bright, and the miniature scale of the piece displays a decorative mantelpiece charm."
--The Boston Globe

"Bruce Chatwin has set a story as delicate as the skyline. . . . In this mordant and suggestive story, he masters the grace, the damp, the dilapidation and the ghostly comedy of the city that produced Kafka and The Good Solider Schweik, The Golem and Don Giovanni, and the inflamed reasonableness of spring, 1968." --Los Angeles Times

Bruce Chatwin (1940-1989) was the author of In Patagonia, The Viceroy of Ouidah, On the Black Hill, The Songlines, and Utz. His other books are What Am I Doing Here and Anatomy of Restlessness, posthumous anthologies of shorter works, and Far Journeys, a collection of his photographs that also includes selections from his travel notebooks.

GOR007282208
Utz by Bruce Chatwin
Bruce Chatwin
Used - Very Good
Paperback
Unknown
0
0140115765
9780140115765
N/A
Book picture is for illustrative purposes only, actual binding, cover or edition may vary.
This is a used book - there is no escaping the fact it has been read by someone else and it will show signs of wear and previous use. Overall we expect it to be in very good condition, but if you are not entirely satisfied please get in touch with us.