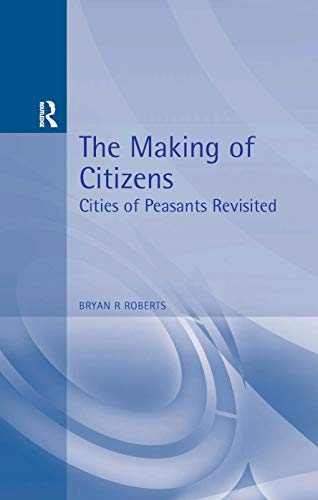 The Making of Citizens
by Bryan Roberts

In Stock
£7.49
Presents an account of the expansion of capitalism in the developing world. Focusing on Latin America, this book traces the evolution of developing societies and their economies. It conveys both the flavour of life in the cities of the third world and the immediacy of their problems.
Very Good
Only 1 left

The Making of Citizens Summary

The Making of Citizens: Cities of Peasants Revisited by Bryan Roberts

Originally published as 'Cities of Peasants', this highly-acclaimed account of the expansion of capitalism in the developing world has now been extensively rewritten and updated.

Focusing on Latin America, Bryan Roberts traces the evolution of developing societies and their economies to the present. Taking account of the move towards more 'open' economies, a shrinking of the state and various transitions towards democracies, he shows how urban growth has produced new patterns of social stratification, creating opportunities for social mobility, but doing little to decrease income inequality or political and social pressures.

Underlying social changes have broadened the practice of citizenship in developing countries, limiting authoritarian rule but within a context of entrenched social inequalities and persisting political instability. This book conveys both the flavour of life in the cities of the third world and the immediacy of their problems.

The Making of Citizens Reviews

...one of the most significant contributions to the growing literature of Third World urbanization.
Annals of the AAG (of the first edition)

...an excellent book, worthy of close study, rewarding to read chapter by chapter, and one whose study will enrich the appreciation of most social scientists of the organization of Latin American cities.
Environment and Planning A (of the first edition)

GOR004704029
The Making of Citizens: Cities of Peasants Revisited by Bryan Roberts
Bryan Roberts
Used - Very Good
Paperback
Taylor & Francis Ltd
1995-10-17
272
0340604786
9780340604786
N/A
Book picture is for illustrative purposes only, actual binding, cover or edition may vary.
This is a used book - there is no escaping the fact it has been read by someone else and it will show signs of wear and previous use. Overall we expect it to be in very good condition, but if you are not entirely satisfied please get in touch with us.