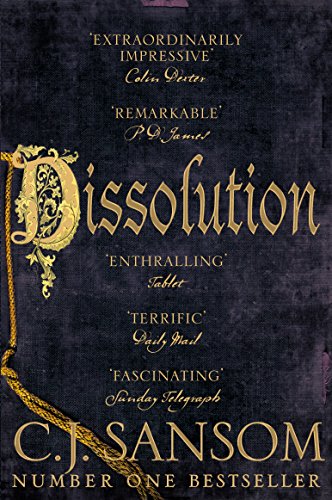 Dissolution is the first in the phenomenal Shardlake series by bestselling author, C. J. Sansom.

England, 1537: Henry VIII has proclaimed himself Supreme Head of the Church and the country is waking up to savage new laws, rigged trials and the greatest network of informers ever seen. Under the order of Thomas Cromwell, a team of commissioners is sent through the country to investigate the monasteries. There can only be one outcome: the monasteries are to be dissolved.

But on the Sussex coast, at the monastery of Scarnsea, events have spiralled out of control. Cromwell's Commissioner Robin Singleton, has been found dead, his head severed from his body. His horrific murder is accompanied by equally sinister acts of sacrilege - a black cockerel sacrificed on the altar, and the disappearance of Scarnsea's Great Relic.

Dr Matthew Shardlake, lawyer and long-time supporter of Reform, has been sent by Cromwell into this atmosphere of treachery and death. But Shardlake's investigation soon forces him to question everything he hears, and everything that he intrinsically believes . . .

Dissolution is the first book in this bestselling phenomenon, where C. J. Sansom creates both a stunning portrait of Tudor England, and an unforgettable character in Matthew Shardlake. Follow Shardlake into the dark heart of Tudor England with the bestselling Dark Fire, Sovereign, Revelation, Heartstone, Lamentation and Tombland.

Matthew Shardlake combines engrossing historical detail with a first-rate murder mystery. A really satisfying page-turner. * Independent on Sunday *
Sansom has a greater talent for animating period details than most of his contemporaries, his rendering of the Tudor winter in the first of the Shardlake series makes you reach for thick fleece blankets. * Guardian *
Remarkable . . . The sights, the voices, the very smell of this turbulent age seem to rise from the page. -- P.D. James
Extraordinarily impressive. The best crime novel I have read this year. -- Colin Dexter
Terrific . . . a remarkable, imaginative feat. It is a first-rate murder mystery and one of the most atmospheric historical novels I've read in years. * Mail on Sunday *
Terrific. Historical fiction at its finest. -- Peter Robinson
Dissolution is not just a fascinating detective story, but a convincing portrait of a turbulent period. * Sunday Telegraph *
I don't read historical novels any more - it's a busman's holiday - but I make an exception for C. J. Sansom's Shardlake books, which are set amid the uncertainties of the 16th-century Henrician Reformation. -- Bernard Cornwell * The Times 'The 25 books you must read' *

GOR007125340
Dissolution by C. J. Sansom
C. J. Sansom
The Shardlake series
Used - Very Good
Paperback
Pan Macmillan
2015-06-16
480
1447285832
9781447285830
Short-listed for CWA New Blood Dagger 2003 (UK) Short-listed for CWA Historical Dagger 2003 (UK) Short-listed for Waverton Good Read Award 2003 (UK)
Book picture is for illustrative purposes only, actual binding, cover or edition may vary.
This is a used book - there is no escaping the fact it has been read by someone else and it will show signs of wear and previous use. Overall we expect it to be in very good condition, but if you are not entirely satisfied please get in touch with us.