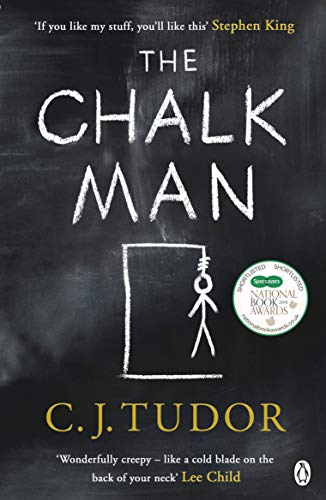 The Chalk Man: The Sunday Times bestseller. The most chilling book you'll read this year by C. J. Tudor

None of us ever agreed on the exact beginning.

Was it when we started drawing the chalk figures, or when they started to appear on their own?

Was it the terrible accident?

Or when they found the first body?

'Deliciously creepy with a side order of Eighties nostalgia' Good Housekeeping

'Plenty of plot twists and an evocative portrait of small-town-life in the 1980s . . . a riveting read' Guardian

'There are shades of Stephen King when the reality bends into the sinister, and a deliciously creepy finale' Daily Mail

'It's a very clever story - you'll love it!' Joanna Cannon

C. J. Tudor's love of writing, especially the dark and macabre, started young. When her peers were reading Judy Blume, she was devouring Stephen King and James Herbert.

Over the years she has had a variety of jobs, including trainee reporter, radio scriptwriter, dog walker, voiceover artist, television presenter, copywriter and, now, author.

Her first novel, The Chalk Man, was a Sunday Times bestseller and has sold in over forty countries.

GOR009300678
The Chalk Man: The Sunday Times bestseller. The most chilling book you'll read this year by C. J. Tudor
C. J. Tudor
Used - Very Good
Paperback
Penguin Books Ltd
2017-08-30
352
1405930950
9781405930956
N/A
Book picture is for illustrative purposes only, actual binding, cover or edition may vary.
The book has been read, but looks new. The book cover has no visible wear, and the dust jacket is included if applicable. No missing or damaged pages, no tears, possible very minimal creasing, no underlining or highlighting of text, and no writing in the margins.