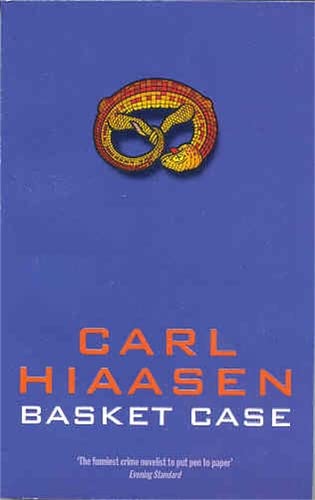 In Stock
£4.49
A Sunday Times bestseller, Basket Case is an entertaining delight from first page to last and spells out a hilariously hard-won triumph for muckraking journalism.
Like New Very Good
Only 2 left

Jack Tagger is a frustrated journalist. His outspoken views have relegated him to the obituary page, with his byline never again to disgrace the front page. But Jack has stumbled across a whale of a story that might just resurrect his career . . .

James Stomarti, infamous frontman of rock band Jimmy and the Slut Puppies, has died in a diving accident and Jack harbours suspicions that the glamorous pop starlet widow may have had a vested interest in her husband's untimely death. It all smells a little too fishy. Aided and abetted by his rather sexy (if unnervingly ambitious) young editor, Emma, Jack sets out to in pursuit of the truth - and a nice juicy story. But of course nothing is ever straightforward and with murderous goons on his tail, brutal internal politics at the paper and a paranoia about death, Jack is struggling to keep his head above water. Was Jimmy Stomarti murdered? Is someone trying to kill off the Slut Puppies one by one? And what significance can a dead lizard named Colonel Tom possibly have?

This is one book you'll kill to get your hands on.

Journalist Jack Tagger's outspoken views have caused him to be relegated to the obituary page - but then he discovers that infamous rock star James Stomarti may have been murdered as opposed to being the victim of a simple diving accident. Another hilarious take on life in Florida by an international bestselling writer.

Carl Hiaasen is the author of Tourist Season, Double Whammy, Skin Tight, Native Tongue, Strip Tease, Stormy Weather, Lucky You and Sick Puppy. Together they have been translated into twenty languages and are all available from Pan Books.

GOR010554711
Basket Case by Carl Hiaasen
Carl Hiaasen
Used - Like New
Paperback
Pan Macmillan
2003-02-07
432
0330490184
9780330490184
N/A
Book picture is for illustrative purposes only, actual binding, cover or edition may vary.
The book has been read, but looks new. The book cover has no visible wear, and the dust jacket is included if applicable. No missing or damaged pages, no tears, possible very minimal creasing, no underlining or highlighting of text, and no writing in the margins.