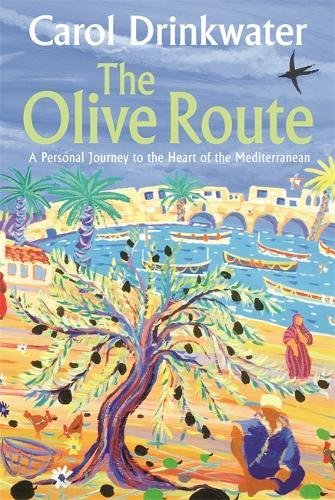 The Olive Route
by Carol Drinkwater

In Stock
£4.49
Fourth volume in the bestselling olive series by writer and actress Carol Drinkwater.
Very Good
Only 3 left

The Olive Route: A Personal Journey to the Heart of the Mediterranean by Carol Drinkwater

The Olive Route resembles both the Silk Road and the Spice Route in that the epic adventures involving the transportation of its produce are highly colourful, intriguing and sometimes bloodthirsty. They embody the entire history of the Mediterranean and its diverse peoples. From the Levant on the eastern coast of its ancient sea, to its western shores, the olive tree is farmed.

For many living around the Mediterranean basin, such as Carol Drinkwater, this silvery-grey evergreen is essential to their lives and diets. It has inspired painters and writers since time immemorial. For those who holiday here or dream of it, the tree evokes dusty fragrant seasons, an escape from urban life.

From Gibraltar to northern Syria the olive route's stretch is 2,200 miles. At its widest, between France and Algeria, the sea spreads 488 miles. Carol Drinkwater vividly unearths its ancient stories, travels its lands, crosses its shimmering, almost-tideless tranquillity. She meets its striking, often courageous, peoples and traces its venerable olive culture. Tracking the Cretans, Phoenicians, the Greeks, the Romans, amongst others, she finds her way back to her olive farm in the sun-baked hills in southern France.

The Olive Route recounts a thrilling, heroic, sensual and entertaining journey by the bestselling author of the much-loved Olive series.

one cannot resist Drinkwater's courage and joie de vivre, nor the enormous appetite and enthusiasm she has for her subject -- Wendy Holden * THE DAILY MAIL *
a vibrant account * SAINSBURYS MAGAZINE *
'part travel journal, part food story, and a social account of the eastern Mediterranean.' * SUNDAY BUSINESS POST *
'Drinkwater has a sharp eye for character, and the people who populate The Olive Route will not disappoint her fans.... -- Danuta Kean * THE INDEPENDENT ON SUNDAY *
'The Olive Route is a thoughtful and passionate addition to the Carol Drinkwater Olive series.' * THE RIVERIA REPORTER *
a hugely enjoyable book. -- Tony Galvin * TUAM HERALD *
the adventures involved in the spread of the olive are colourful and intriguing * TRAVELLER *
an effortless, flowing narrative that draws you in and makes you her travelling companion. * SMART LIFE INTERNATIONAL *
an inspiring and captivating read.....a lively, often humorous account, providing a fabulous insight to the olive route. -- Rhona Wells * MIDDLE EAST MAGAZINE *

Actress Carol Drinkwater is probably best known for her role as Helen Herriot in the BBC series 'All Creatures Great and Small.' Also an accomplished novelist, she has achieved bestselling status with her much-loved memoirs of life on an olive farm in Provence, of which this is the fourth volume.

GOR001134269
The Olive Route: A Personal Journey to the Heart of the Mediterranean by Carol Drinkwater
Carol Drinkwater
Used - Very Good
Hardback
Orion Publishing Co
2006-10-01
336
0297847899
9780297847892
N/A
Book picture is for illustrative purposes only, actual binding, cover or edition may vary.
This is a used book - there is no escaping the fact it has been read by someone else and it will show signs of wear and previous use. Overall we expect it to be in very good condition, but if you are not entirely satisfied please get in touch with us.