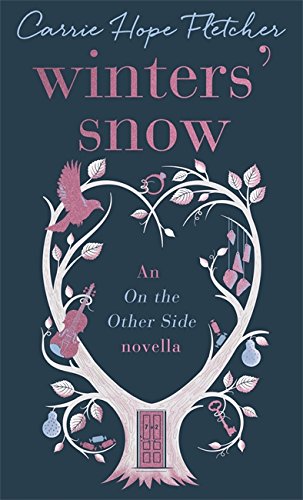 An exclusive On the Other Side novella featuring the characters Vincent Winters and Evie Snow.

An exclusive On the Other Side novella featuring the characters Vincent Winters and Evie Snow.

Evie Snow was the love of Vincent Winters' life, and of every lifetime he would ever live, but they didn't get the ending they wanted. He never stopped loving her though and he never, ever, forgot about her.

Suddenly Vincent has the chance to right an old wrong and to finally prove himself worthy of Evie's love - he just needs to get to her first.

As Vincent begins the journey of a lifetime, he learns more about love than he ever thought possible, and somehow, some way, he may also find his way back to the only woman he ever truly loved . . .

Carrie played the role of Eponine in Les Miserables at the Queen's Theatre in London's West End for almost three years. She has since stared in and received awards for a number of productions including The War of the Worlds, The Addams Family, and Heathers: The Musical. Carrie will soon rejoin Les Miserables, this time playing Fantine, in a new concert version at the Gielgud Theatre.

Carrie lives just outside of London with numerous fictional friends that she keeps on bookshelves, just in case. Carrie's debut album, also called When the Curtain Falls, was released in 2018.

GOR008180874
9780751568707
0751568708
Winters' Snow by Carrie Hope Fletcher
Carrie Hope Fletcher
Used - Very Good
Paperback
Little, Brown Book Group
2016-11-15
48
N/A
Book picture is for illustrative purposes only, actual binding, cover or edition may vary.
This is a used book - there is no escaping the fact it has been read by someone else and it will show signs of wear and previous use. Overall we expect it to be in very good condition, but if you are not entirely satisfied please get in touch with us
Trustpilot