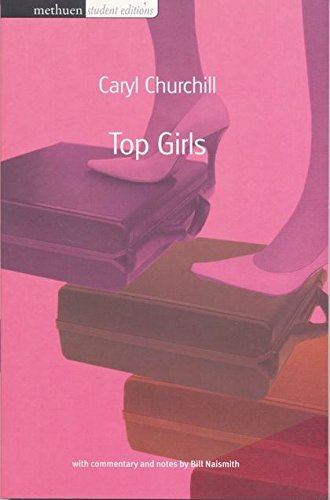 In Stock
£3.99
A play which looks at the political costs of women rising to the top. This volume is published in the Student Edition series and as well as the text of the play there is a chronology of the playwright's life and work, an introduction giving the theatrical and social content of the play and questions for study.
Like New Very Good Good
Only 3 left

Marlene hosts a dinner part in a London restaurant to celebrate her promotion to managing director of 'Top Girls' employment agency. Her guests are five women from the past: Isabella Bird (1831- 1904), the adventurous traveller; Lady Nijo (b1258), the mediaeval Japanese courtesan who became a Buddhist nun and travelled on foot through Japan; Dull Gret, who as Dulle Griet in a Bruegel painting, led a crowd of women on a charge through hell; Pope Joan, the transvestite early female pope and last but not least Patient Griselda, and obedient wife out of Chaucer. As the evening continues we are involved with the stories of all five women and the more pressing dilemmas of Marlene herself. A classic of contemporary theatre, Churchill's play is seen as a benchmark for ushering a new generation of playwrights after it was premiered by the Royal Court in 1982. "Top Girls has a combination of directness and complexity which keeps you both emotionally and intellectually alert. You can smell life, and at the same time feel locked in an argument with an agile and passionate mind." (John Peter, Sunday Times) This volume contains a chronology of the playwright's life and work; an introduction giving the background to the play; a discussion of the various interpretations, notes on individual words and phrases and photographs from stage productions.

""Top Girls" has a combination of directness and complexity which keeps you both emotionally and intellectually alert. You can smell life and at the same time feel locked in an argument with an agile and passionate mind."-Sunday Times "Ms. Churchill is one of the best writers...her play is brilliantly conceived with considerable wit to illuminate the underlying deep human seriousness of her theme."-"Spectator"

"A dramatist who must surely be rated among the half-dozen best now writing a playwright of genuine audacity and assurance, able to use her considerable wit and intelligence in ways at once unusual, resonant and dramatically riveting."-"New Statesman"

Part 1 Commentary: what kind of play?; the play world - the world of women; themes and context; the new woman; act one - women and work; act two - women and politics; act three - language; structure; the play in performance - how many actors?. Part 2 Top girls: act one; act two; act three.

GOR010460862
Top Girls by Caryl Churchill
Caryl Churchill
Modern Plays
Used - Like New
Paperback
Unknown
0
0413644707
9780413644701
N/A
Book picture is for illustrative purposes only, actual binding, cover or edition may vary.
This is a used book - there is no escaping the fact it has been read by someone else and it will show signs of wear and previous use. Overall we expect it to be in very good condition, but if you are not entirely satisfied please get in touch with us.