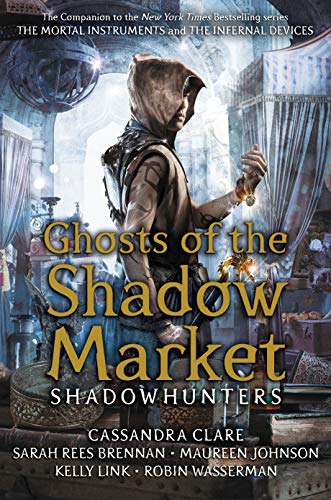 Ghosts of the Shadow Market by Cassandra Clare

Ghosts of the Shadow Market by Cassandra Clare

A hardback collection of all eight Ghosts of the Shadow Market stories, along with two brand new ones, about characters from Cassandra Clare's internationally bestselling Shadowhunters series.

The Shadow Market is a meeting point for faeries, werewolves, warlocks and vampires. There the Downworlders buy and sell magical objects, make dark bargains, and whisper secrets they do not want the Nephilim to know. Through two centuries, however, there has been a frequent visitor to the Shadow Market from the City of Bones, the very heart of the Shadowhunters. As a Silent Brother, Brother Zachariah is sworn keeper of the laws and lore of the Nephilim. But once he was a Shadowhunter called Jem Carstairs, and his love, then and always, is the warlock Tessa Gray.

Follow Brother Zachariah and see, against the backdrop of the Shadow Market's dark dealing and festival, Anna Lightwood's doomed romance, Matthew Fairchild's great sin and Tessa Gray plunged into a world war. Valentine Morgenstern buys a soul at the Market and a young Jace Wayland's soul finds safe harbor. In the Market is hidden a lost heir and a beloved ghost, and no-one can save you once you have traded away your heart. Not even Brother Zachariah.

Cassandra Clare is the author of the internationally bestselling Mortal Instruments, The Infernal Devices, The Bane Chronicles, The Dark Artifices, The Shadowhunter's Codex and Tales from the Shadowhunter Academy. Her books have more than 36 million copies in print worldwide and have been translated into more than thirty-five languages. The Mortal Instruments: City of Bones is a major movie and Shadowhunters is airing on Netflix. Cassandra lives in Massachusetts, USA. Visit her online at CassandraClare.com. Learn more about the world of the Shadowhunters at UKShadowhunters.com. Sarah Rees Brennan is the author of The Demon's Lexicon, the Lynburn Legacy series, and the novels Tell the Wind and Fire and In Other Lands. Find her on Twitter: @sarahreesbrenna Maureen Johnson is the New York Times and USA Today bestselling author of 13 Little Blue Envelopes, Suite Scarlett, and The Name of the Star. Maureen lives in New York, and online on Twitter. Kelly Link is the author of the collections Stranger Things Happen, Magic for Beginners, Pretty Monsters, and Get in Trouble. She is the co-founder of Small Beer Press and currently lives in Massachusetts. Robin Wasserman is the author of the Seven Deadly Sins series, Hacking Harvard, the Skinned trilogy, and The Book of Blood and Shadow, as well as Girls on Fire, her first novel for adults. She lives in New York.
GOR010258205
9781406385366
1406385360
Ghosts of the Shadow Market by Cassandra Clare
Cassandra Clare
Ghosts of the Shadow Market
Used - Like New
Hardback
Walker Books Ltd
2019-06-06
624
N/A
Book picture is for illustrative purposes only, actual binding, cover or edition may vary.
The book has been read, but looks new. The book cover has no visible wear, and the dust jacket is included if applicable. No missing or damaged pages, no tears, possible very minimal creasing, no underlining or highlighting of text, and no writing in the margins
Trustpilot