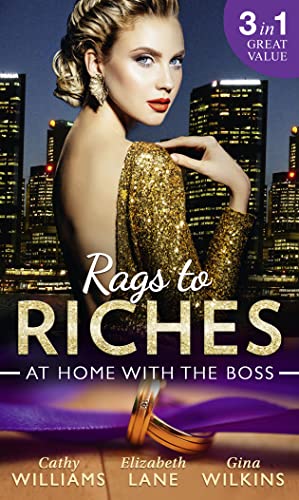 Rags To Riches: At Home With The Boss
by Cathy Williams

She's at His Service

Rags To Riches: At Home With The Boss Summary

Rags To Riches: At Home With The Boss: The Secret Sinclair / The Nanny's Secret / A Home for the M.D. by Cathy Williams

She's at His Service

One night with playboy Raoul Sinclair leaves Sarah with more than a memory...she's pregnant! Five years later and Sarah's struggling, working as an office cleaner. When her new, gorgeous boss walks in, Sarah's on her knees scrubbing the floor and her eyes lift to see Raoul, the man she never forgot.

Nanny Leigh Foster knows she has to keep it professional with her boss, haughty and handsome billionaire Wyatt Richardson. In charge of his teenage daughter and her new-born son, Leigh has a secret that could change their lives forever.

Top surgeon Mitch shouldn't be captivated by the intriguing beauty who keeps his sister's house running, but he is and he knows Jacqui's attracted to him. She's keeping him at arm's length, so Mitch will have to use his most persuasive bedside manner to convince her that he's more than a sexy workaholic!

Cathy Williams is a great believer in the power of perseverance as she had never written anything before her writing career, and from the starting point of zero has now fulfilled her ambition to pursue this most enjoyable of careers. She would encourage any would-be writer to have faith and go for it! She derives inspiration from the tropical island of Trinidad and from the peaceful countryside of middle England. Cathy lives in Warwickshire her family. Elizabeth Lane has lived and travelled in many parts of the world, including Europe, Latin America and the Far East, but her heart remains in the American West, where she was born and raised. Her idea of heaven is hiking a mountain trail on a clear autumn day. She also enjoys music, animals and dancing. You can learn more about Elizabeth by visiting her website at www.elizabethlaneauthor.com Author of more than 100 novels, Gina Wilkins loves exploring complex interpersonal relationships and the universal search for "a safe place to call home." Her books have appeared on numerous bestseller lists, and she was a nominee for a lifetime achievement award from Romantic Times magazine. A lifelong resident of Arkansas, she credits her writing career to a nagging imagination, a book-loving mother, an encouraging husband and three "extraordinary" offspring.

GOR008264274
Rags To Riches: At Home With The Boss: The Secret Sinclair / The Nanny's Secret / A Home for the M.D. by Cathy Williams
Cathy Williams
Used - Very Good
Paperback
HarperCollins Publishers
2017-04-06
592
0263930653
9780263930658
N/A
Book picture is for illustrative purposes only, actual binding, cover or edition may vary.
This is a used book - there is no escaping the fact it has been read by someone else and it will show signs of wear and previous use. Overall we expect it to be in very good condition, but if you are not entirely satisfied please get in touch with us.