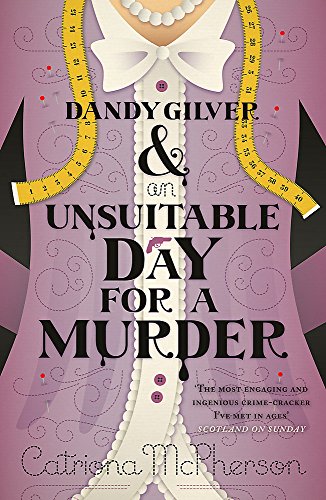 Dandy Gilver and an Unsuitable Day for a Murder Summary

'One of several authors recreating the Golden Age of the British crime novel and a legion of fans adore the tongue-in-cheek cases that come the way of Dandy Gilver, a very Scottish middle class sleuth.' Northamptonshire Evening Telegraph

'Careful what you wish for, lest it come true' is my new motto, and here is why. I was summoned to Dunfermline, that old grey town, in the matter of a missing heiress.

She had flounced off in a sulk over forbidden love and I, suspecting elopement, was loath to take the job of scouring guesthouses to find the little madam and her paramour.

Before I could wriggle out of it, though, there was a murder in the mix - or was it suicide? I had hardly begun to decide when it happened again. Then I was sacked. Actually sacked! By two separate people, and both dismissals in writing. And that's not even the worst of it, darling: matters here are careering downwards much in the style of a runaway train.

Please hurry - or who knows where it might end,

Catriona McPherson's latest novel in the series, Dandy Gilver and a Spot of Toil and Trouble is now available for pre-order.

Dandy Gilver and an Unsuitable Day for a Murder Reviews

The period features are done with aplomb, the dialogue shines with Golden Age wit, and McPherson's heroine is warm and sharp as well as ingenious at solving the mysteries she is presented with. * Scotland on Sunday on DANDY GILVER AND AN UNSUITABLE DAY FOR A MURDER *
A subtle detonation of the cosy genre... an acute sense of period, sharp observation of the mores of the day (both above and below stairs), a nicely-judged infusion of humour and a winning heroine. * Independent on DANDY GILVER AND THE PROPER TREATMENT OF BLOODSTAINS *
Guaranteed to appeal to those who have never got over the death of Dorothy L Sayers . . . McPherson has an ear for mellifluous language ... The story bristles with clues, and the resolution.. is unguessable. * Financial Times on DANDY GILVER AND THE PROPER TREATMENT OF BLOODSTAINS *
Dan Brown meets Barbara Pym . . . Dandy is brisk, baffled, heroic, kindly, scandalised and - above all - very funny * Guardian *

Catriona McPherson was born in the village of Queensferry in south-east Scotland in 1965 and educated at Edinburgh University. She left with a PhD in Linguistics and spent a few years as a university lecturer before beginning to write fiction. The first Dandy Gilver novel was short-listed for the CWA Ellis Peters Historical Dagger 2005 and the second was long-listed for the Theakston's Crime Novel of the Year Award 2007. Catriona writes full-time and divides her time between southern Scotland and northern California

GOR002790203
Dandy Gilver and an Unsuitable Day for a Murder by Catriona McPherson
Catriona McPherson
Dandy Gilver
Used - Very Good
Paperback
Hodder & Stoughton General Division
2011-04-14
304
0340992980
9780340992982
Winner of Bruce Alexander Award 2013 (UK) Winner of Historical Agatha Award 2013 (UK)
Book picture is for illustrative purposes only, actual binding, cover or edition may vary.
This is a used book - there is no escaping the fact it has been read by someone else and it will show signs of wear and previous use. Overall we expect it to be in very good condition, but if you are not entirely satisfied please get in touch with us.