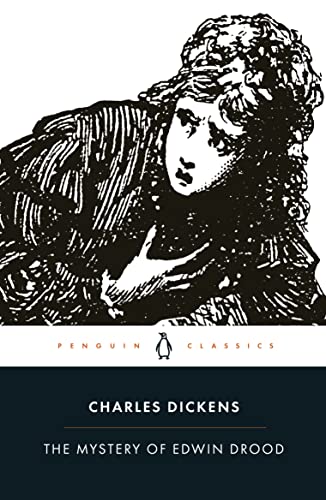 The Mystery of Edwin Drood
by Charles Dickens

In Stock
£7.99
Edwin Drood is contracted to marry orphan Rosa Bud when he comes of age, but when they find that duty has gradually replaced affection, they agree to break off the engagement.
Very Good Good Well Read
8 in stock

The Mystery of Edwin Drood Summary

The Mystery of Edwin Drood by Charles Dickens

Charles Dickens's final, unfinished novel, and one that has puzzled readers and inspired writers since its publication, The Mystery of Edwin Drood is edited with an introduction by David Paroissien in Penguin Classics.

Edwin Drood is contracted to marry orphan Rosa Bud when he comes of age, but when they find that duty has gradually replaced affection, they agree to break off the engagement. Shortly afterwards, in the middle of a storm on Christmas Eve, Edwin disappears, leaving nothing behind but some personal belongings and the suspicion that his jealous uncle John Jasper, madly in love with Rosa, is the killer. And beyond this presumed crime there are further intrigues: the dark opium dens of the sleepy cathedral town of Cloisterham, and the sinister double life of Choirmaster Jasper, whose drug-fuelled fantasy life belies his respectable appearance. Dickens died before completing The Mystery of Edwin Drood, leaving its tantalising mystery unsolved and encouraging successive generations of readers to turn detective.

This edition contains an introduction by David Paroissien, discussing the novel's ending, with a chronology, notes, original illustrations by Samuel Luke Fildes, appendices on opium use in the nineteenth century, the 'Sapsea Fragment' and Dickens's plans for the story's conclusion.

If you enjoyed The Mystery of Edwin Drood, you might like Dickens's Little Dorrit, also available in Penguin Classics.

Charles Dickens (1812-70) was a political reporter and journalist whose popularity was established by the phenomenally successful Pickwick Papers (1836-7). His novels captured and held the public imagination over a period of more than thirty years. David Paroissien is Professor of English at the University of Massachusetts. He is editor of the Dickens Quarterly and author of a number of books on Dickens.

GOR001211799
The Mystery of Edwin Drood by Charles Dickens
Charles Dickens
Used - Very Good
Paperback
Penguin Books Ltd
2002-03-28
432
0140439269
9780140439267
N/A
Book picture is for illustrative purposes only, actual binding, cover or edition may vary.
This is a used book - there is no escaping the fact it has been read by someone else and it will show signs of wear and previous use. Overall we expect it to be in very good condition, but if you are not entirely satisfied please get in touch with us.