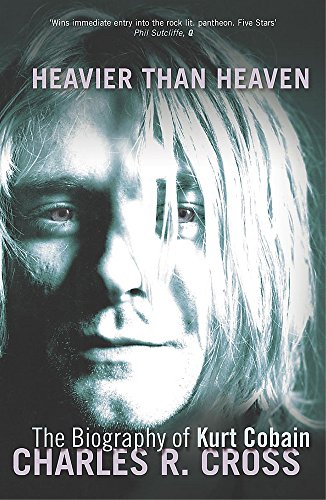 In Stock
£4.49
The definitive biography of Kurt Cobain.
Like New Very Good
9 in stock

Heavier Than Heaven: The Biography of Kurt Cobain by Charles R. Cross

A NEW, COMMEMORATIVE EDITION OF THE DEFINITIVE, BESTSELLING BIOGRAPHY

Alongside the death of Elvis Presley and the assassination of John Lennon, Kurt Cobain's suicide in 1994 ranks as one of the generational milestones of American life - an epochal event in both rock 'n' roll and youth culture.

This book is the story of Kurt Cobain's life, from abject poverty to unbelievable wealth, power and fame. It traces the journey from his humble origins in Aberdeen to becoming lead singer of Nirvana, the most popular rock band in the world from 1991 to 1994, and the most influential band of this decade. The beautifully written text is complimented by 16 pages of photographs.

Based on over one hundred interviews, Charles Cross allows us to understand Kurt Cobain's personality. This is an incredible tale of a strange, tortured and very talented man.

This superbly researched and harrowing book...The squalor is ghastly but the sheer sadness of Cobain's brief life is beautifully conveyed here. Cross has painstakingly accumulated a wealth of telling detail... * Robert Sandall in THE SUNDAY TIMES *
Cross's research is impeccable... he writes with a fine mixture of sympathy and sense, weeding the myth of all its lies and exaggerations, but never minimising the complexity of his subject. HEAVIER THAN HEAVEN is, or should be, the last word on Kurt Cobain. * Lynn Barber in the DAILY TELEGRAPH *
I was very glad to read this biography, the result of four years' research and 400 interviews, not to mention the sainted Kurt's police and medical records AND his unpublished journals. I was in hog heaven all the way through - in a caring, wistful way, of course. * Julie Birchill in THE GUARDIAN *
A biography worth reading. The book is especially good once we get past Cobain's squalid early years to the moment when he suddenly wakes up to find himself the most famous pop star in the world. * James Delingpole in THE SUNDAY TELEGRAPH *
Cross's portrayal of a shy but prodigiously gifted child, in artistic as well as musical terms, is a joy to read * THE OBSERVER *
The secret here is that Cross was allowed unprecedented access to Cobain's world; his diaries, artworks and most significantly the people who surrounded him. Cross may vividly depict the seemingly inevitable demise of a rock star but he also successfully conveys just what all the fuss was about in the first place. * THE LIST *

Charles R. Cross has lived in Seattle for many years, is the former editor for the Rocket and writes for Rolling Stone and Esquire.

GOR000940900
Heavier Than Heaven: The Biography of Kurt Cobain by Charles R. Cross
Charles R. Cross
Used - Very Good
Paperback
Hodder & Stoughton General Division
2002-06-20
400
0340739398
9780340739396
N/A
Book picture is for illustrative purposes only, actual binding, cover or edition may vary.
This is a used book - there is no escaping the fact it has been read by someone else and it will show signs of wear and previous use. Overall we expect it to be in very good condition, but if you are not entirely satisfied please get in touch with us.