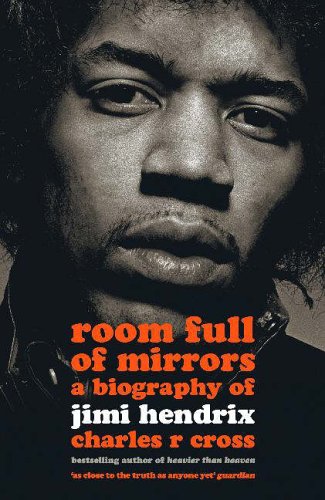 In Stock
£4.49
'Charles R Cross has got as close to the truth as anyone yet in his exhaustive and ground-breaking account of the life of the greatest guitarist in the history of rock.' Observer
Very Good
9 in stock

Jimi Hendrix continues to fascinate, and sell huge quantities of albums, even 35 years after his death. Quite apart from his influence on musicians and fans, a large part of the appeal of his sensational life story lies in the thrill of the era whose values he came to stand for. The Sixties still exert a massive pull over pop culture and this is genuinely a book for anyone interested, not only in Hendrix but also in anything to do with the pop culture of the last 40 years.

Meticulously researched and sensitively and beautifully written, this is a labour of love that reveals the nuances, foibles and tragedies of the human being behind the iconic image.

This is the sweeping, authoritative and colourful biography that Jimi Hendrix deserves and that his legions of fans, young and old have been waiting for.

'meticulously researched' * Mojo *
''Charles R Cross has got as close to the truth as anyone yet in his exhaustive and ground-breaking account of the life of the greatest guitarist in the history of rock.' * Guardian *
'Hendrix emerges from this superb biography as not only a big old sexy genius, but as a funny, sensitive, and very naughty boy.' * Sunday Telegraph *
For HEAVIER THAN HEAVEN:
One of the most moving and revealing books ever written about a rock star. * Los Angeles Times *
Cross's research is impeccable... he writes with a fine mixture of sympathy and sense, weeding the myth of all its lies and exaggerations but never minimising the complexity of his subject. * Lynn Barber, Daily Telegraph *
Wins immediate entry into the rock lit pantheon. Five stars. * Q Magazine *
A superbly researched and harrowing book. * The Sunday Times *
Cross's portrayal of a shy but prodigiously gifted child is a joy to read. * Observer *
Groundbreaking * New York Times Book Review *

Charles Cross was the editor of The Rocket, northwest America's leading music magazine, from 1986 to 2000. He is now a freelance writer and journalist writing for diverse publications from The Times to Rolling Stone, Playboy to Guitar World. His previous book Heavier Than Heaven, was a huge critical and commercial success. He lives in Seattle with his family.

GOR001099741
Room Full of Mirrors by Charles R. Cross
Charles R. Cross
Used - Very Good
Paperback
Hodder & Stoughton General Division
2006-06-05
400
0340826843
9780340826843
N/A
Book picture is for illustrative purposes only, actual binding, cover or edition may vary.
This is a used book - there is no escaping the fact it has been read by someone else and it will show signs of wear and previous use. Overall we expect it to be in very good condition, but if you are not entirely satisfied please get in touch with us.