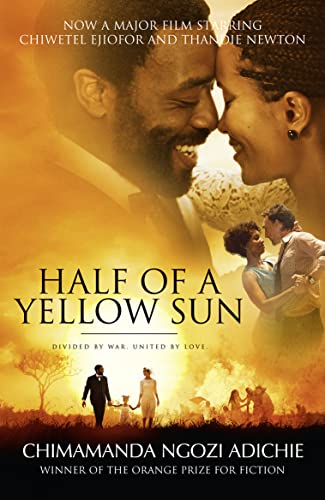 Half of a Yellow Sun
by Chimamanda Ngozi Adichie

Winner of the Orange Broadband Prize for Fiction 2007, this is a heartbreaking, exquisitely written literary masterpiece. Now a major film starring Thandie Newton and Chiwetel Ejiofor, due for release in 2014

Half of a Yellow Sun Summary

Half of a Yellow Sun by Chimamanda Ngozi Adichie

Winner of the Orange Broadband Prize for Fiction 2007, this is a heartbreaking, exquisitely written literary masterpiece. Now a major film starring Thandie Newton and Chiwetel Ejiofor, due for release in 2014

In 1960s Nigeria, Ugwu, a boy from a poor village, goes to work for Odenigbo, a radical university professor. Soon they are joined by Olanna, a young woman who has abandoned a life of privilege to live with her charismatic lover. Into their world comes Richard, an English writer, who has fallen for Olanna's sharp-tongued sister Kainene. But when the shocking horror of civil war engulfs the nation, their loves and loyalties are severely tested, while their lives pull apart and collide once again in ways none of them could have imagined...

Half of a Yellow Sun Reviews

'Vividly written, thrumming with life ... a remarkable novel. In its compassionate intelligence as in its capacity for intimate portraiture, this novel is a worthy successor to such twentieth-century classics as Chinua Achebe's "Things Fall Apart" and V. S. Naipaul's "A Bend in the River".' Joyce Carol Oates

'Here is a new writer endowed with the gift of ancient storytellers.' Chinua Achebe

'I look with awe and envy at this young woman from Africa who is recording the history of her country. She is fortunate - and we, her readers, are even luckier.' Edmund White

'Heartbreaking, funny, exquisitely written and, without doubt, a literary masterpiece and a classic.' Daily Mail

'Stunning. This novel is an immense achievement.' Observer

`The first great African novel of the new century.' Guardian

'Absolutely awesome. One of the best books I've ever read.' Judy Finnigan

'I wasted the last fifty pages, reading them far too greedily and fast, because I couldn't bear to let go ... It is a magnificent second novel - and can't fail to find the readership it deserves and demands.' Margaret Forster

'[Deserves] a place alongside such works as Pat Barker's "Regeneration" trilogy and Helen Dunmore's depiction of the Leningrad blockade, "The Siege".' Guardian

`Adichie uses language with relish. She infuses her English with a robust poetry.' Helen Dunmore, The Times

`Adichie succeeds in tackling the horrors of this war, imbuing her portrayal of three disparate characters ... with warmth, wisdom and an acute insight into human nature.' Daily Telegraph

`This powerful, delicate, intimate novel focuses on an individual's thoughts and emotions, the subtleties of human relationships and the psychological legacies of colonialism.' Observer

'A fresh examination of the ravages of war ... a welcome addition to the corpus of African letters.' TLS

Chimamanda Ngozi Adichie was born in Nigeria in 1977. Her first novel `Purple Hibiscus' was published in 2003 and was longlisted for the Booker Prize. Her second novel `Half of a Yellow Sun' won the 2007 Orange Prize for Fiction. Her short story collection, `The Thing Around Your Neck', was published to critical acclaim in 2009. Her work has been selected by the Commonwealth Broadcasting Association and the BBC Short Story Awards, has appeared in various literary publications, including Zoetrope and The Iowa Review. She won a MacArthur `genius' grant in 2009, and in 2010 appeared on the New Yorker's list of the best 20 writers under 40. Her third novel, `Americanah', was published to widespread critical acclaim in 2013. She lives in Nigeria.

GOR005605051
Half of a Yellow Sun by Chimamanda Ngozi Adichie
Chimamanda Ngozi Adichie
Used - Very Good
Paperback
HarperCollins Publishers
2014-03-13
448
0007506074
9780007506071
Winner of Baileys Women's Prize for Fiction: Best of the Best 2015 Winner of Baileys Women's Prize for Fiction 2007
Book picture is for illustrative purposes only, actual binding, cover or edition may vary.
This is a used book - there is no escaping the fact it has been read by someone else and it will show signs of wear and previous use. Overall we expect it to be in very good condition, but if you are not entirely satisfied please get in touch with us.