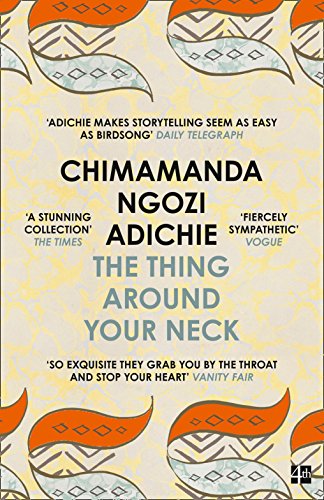 The Thing Around Your Neck
by Chimamanda Ngozi Adichie

From the Orange Prize-winning author of 'Half of a Yellow Sun' come twelve dazzling stories that turn a penetrating eye on the ties that bind men and women, parents and children, Nigeria and the West.

The Thing Around Your Neck Summary

The Thing Around Your Neck by Chimamanda Ngozi Adichie

From the Orange Prize-winning author of 'Half of a Yellow Sun' come twelve dazzling stories that turn a penetrating eye on the ties that bind men and women, parents and children, Nigeria and the West.

In 'A Private Experience', a medical student hides from a violent riot with a poor Muslim woman whose dignity and faith force her to confront the realities and fears she's been pushing away.

In 'Tomorrow Is Too Far', a woman unlocks the devastating secret that surrounds her brother's death.

The young mother at the centre of 'Imitation' finds her comfortable life threatened when she learns that her husband back in Lagos has moved his mistress into their home.

And the title story depicts the choking loneliness of a Nigerian girl who moves to an America that turns out to be nothing like the country she expected; though falling in love brings her desires nearly within reach, a death in her homeland forces her to re-examine them.

Searing and profound, suffused with beauty, sorrow and longing, this collection is a resounding confirmation of Chimamanda Ngozi Adichie's prodigious storytelling powers.

The Thing Around Your Neck Reviews

'"The Thing Around your Neck", with its warm and sympathetic heroines and its finely cadenced un-American English prose, demonstrates that she is keeping faith with her talent and with her country.' Lindsay Duguid, Sunday Times

'Her particular gift is the seductive ability to tell a story...Adichie writes with an economy and precision that makes the strange seem familiar. She makes storytelling seem as easy as birdsong.' Jane Shilling, Telegraph

'Adichie's spare, poised prose, the coolness of her phrasing, ensures these scenes are achieved without melodrama. And though she writes very specifically about Nigeria, the stories have a universal application.' FT

'An elegant collection. From beginning to end the prose is serene and the characterization deft.' TLS

'The powerful themes close to Adichie's heart shine through, but never over-shadow writing of clarity and brilliance.' Aminatta Forna, Guardian

GOR001341313
The Thing Around Your Neck by Chimamanda Ngozi Adichie
Chimamanda Ngozi Adichie
Used - Very Good
Paperback
HarperCollins Publishers
2009-09-03
300
0007306210
9780007306213
Short-listed for John Llewellyn Rhys Memorial Prize 2009
Book picture is for illustrative purposes only, actual binding, cover or edition may vary.
This is a used book - there is no escaping the fact it has been read by someone else and it will show signs of wear and previous use. Overall we expect it to be in very good condition, but if you are not entirely satisfied please get in touch with us.