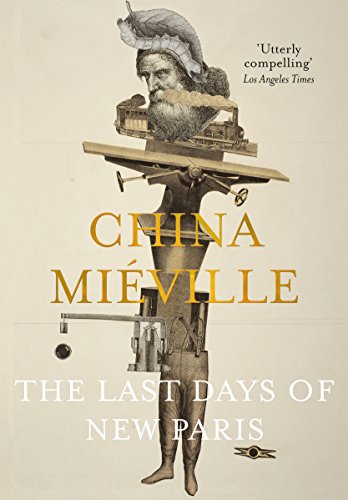 The Last Days of New Paris
by China Mieville

New Price
£7.99
Free Shipping in the UK
A thriller of a war that never was. In The Last Days of New Paris, China Mieville entwines true historical events and people with his daring, uniquely imaginative brand of fiction, reconfiguring history and art into something new.
New£7.99

The Last Days of New Paris by China Mieville

Weaving together the historical and the imagined, China Mieville's The Last Days of New Paris is a surreal and extraordinary work, from the author of The City & The City.

1941. In the chaos of wartime Marseille, American engineer and occult disciple Jack Parsons stumbles onto a clandestine anti-Nazi group, including Surrealist theorist Andre Breton. In the strange games of dissident diplomats, exiled revolutionaries, and avant-garde artists, Parsons finds and channels hope. But what he unwittingly unleashes is the power of dreams and nightmares, changing the war and the world for ever.

1950. A lone Surrealist fighter, Thibaut, walks a new, hallucinogenic Paris, where Nazis and the Resistance are trapped in unending conflict, and the streets are stalked by living images and texts - and by the forces of Hell. To escape the city, Thibaut must join forces with Sam, an American photographer intent on recording the ruins, and make common cause with a powerful, enigmatic figure of chance and rebellion: the exquisite corpse.

But Sam is being hunted. And new secrets will emerge that will test all their loyalties - to each other, to Paris old and new, and to reality itself.

A dazzling scholarly fantasy . . . The bestiary of surrealist manifs, or manifestations, that Mieville parades before us is dazzling . . . the effect is exhilaratingly precise and serious, as though Albert Camus had rewritten Raiders of the Lost Ark . . . At the story's climax it turns out to be satisfyingly horrible, but not as bad as what follows - a brilliantly eerie apparition that it would be invidious to reveal here . . . This intense, scholarly fantasy speaks to our age. * Guardian *
Treading the line between beauty and horror, history and fantasy, Mieville filters a clash of art and philistinism through the medium of wartime spy fiction. This dense, clever book's flights of fancy are grounded in details such as "a miraculously uneaten cat" dashing for cover, the whole thing rounded off with a knowing satirical wink. * Financial Times *
[The Last Days of New Paris] has a hallucinatory jeu d'esprit . . . Fun, very inventive and thoughtful, particularly for readers interested in Surrealism's revolutionary politics. I loved it. * Daily Telegraph *
If anyone were to write a sequel to Invisible Cities, Italo Calvino's dreamlike catalogue of fantastic places, then China Mieville might well be the man for the job . . . Mieville has always had a knack for visions of the uncanny . . . Here he is evoking other people's imaginings, still with precision and grace. * Times Literary Supplement *
Initially joyous, fundamentally chilling book . . . Riotous . . . With its fractured oppositions, bad taste, demagoguery and monstrous alliances it seems all too relevant. * Spectator *
There's so much absurd beauty among the fauna in this story of surrealist art come to life in Nazi-occupied France, in fact, that the author's subtler points about imagination and oppression arrive as a surprise . . . The finale of The Last Days of New Paris is both moving and disturbingly timely: Imagination has often been used to puncture fascism; now Mieville asks whether fascism can defeat and subvert art. * Newsday *
A fine introduction to [Mieville's] unique imagination * Chicago Tribune *
A strange and compelling tale. * New York Post *
A novel both unhinged and utterly compelling, a kind of guerrilla warfare waged by art itself, combining both meticulous historical research and Mieville's unparalleled inventiveness. * Los Angeles Times *
Hauntingly poetic, strangely beautiful . . . The characters, especially Sam the journalist, are vividly drawn into life. This is a book that deftly balances thumping action with quiet contemplation. * San Francisco Book Review *
Mieville's subtle understanding of politics, married to his sophisticated interest in science and art, gives us a short tale that is packed with ideas and inventions . . . A page-turner whose end left me almost physically applauding. -- Michael Moorcock * New Statesman *
Fascinating . . . an unforgettable dreamscape superimposed on the familiar, a manifestation of the mind worth examining. -- Barnes and Noble blog
Fantasy and historical events intermingle in a visionary tale of war and resistance taking in surrealist Andre Breton, the Nazi occupation and the forces of hell * Guardian *
That you really want to know what side will win says much about the quality of a necessarily strange and uncompromising book that reminds us that the old weird of surrealism still has the power to shock if we remember to look at it with fresh eyes. * SFX *
Mieville takes one of the most exhausted tropes of alternate history - a counterfactual Second World War - and breathes joyously vivid life into it. With relish and thoughtful deliberation, he juxtaposes the intentional irrationality of Surrealism with the uglier, bloodier irrationality of warfare . . . The Last Days Of New Paris not only delivers all the fun its premise suggests, but thrills with the sheer depth of its ambition, invention and historical detail. * Sunday Herald (Glasgow) *
Beautiful, stunningly realized . . . [The Last Days of New Paris] is a brief vacation in alien latitudes, a midnight layover in an imaginary place. -- NPR

China Mieville is the award-winning author of many books, including The City & The City, Embassytown and Perdido Street Station. He lives and works in London.