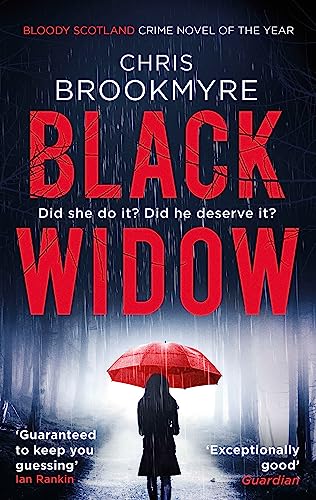 Twists abound in the brilliant multi-award-nominated psychological thriller from master author Chris Brookmyre - perfect for readers of The Girl on the Train and Disclaimer.

The seventh book in the Jack Parlabane series, from author Christopher Brookmyre.

Twists abound in the brilliant new psychological thriller from master author Chris Brookmyre - perfect for readers of The Girl on the Train, I See You and Disclaimer.


Did she do it? Did he deserve it?

Diana Jager is clever, strong and successful, a skilled surgeon and fierce campaigner via her blog about sexism. Yet it takes only hours for her life to crumble when her personal details are released on the internet as revenge for her writing.

Then she meets Peter. He's kind, generous, and knows nothing about her past: the second chance she's been waiting for.

Within six months, they are married. Within six more, Peter is dead in a road accident, a nightmare end to their fairytale romance.

But Peter's sister Lucy doesn't believe in fairytales, and tasks maverick reporter Jack Parlabane with discovering the dark truth behind the woman the media is calling Black Widow...

A celtic Gone Girl... guaranteed to keep you guessing * Ian Rankin *
Black Widow is a stand-out thriller, reminiscent of the best of Nordic Noir but with its own vivid landscape * Renee Knight, author of Disclaimer *
Brookmyre opens with a dramatic court scene, followed by a series of clever twists that challenge the reader to work out who is the victim of an extremely sophisticated crime * Sunday Times *
Exceptionally good - a knotty mystery that's not just richly, provocatively political but one of the most perceptive excavations of a dysfunctional marriage I can remember reading.... Brookmyre plays a cunning, careful game * Guardian *
I didn't know what was going to happen next in this epic thriller. I urge you to read it, too * Sun *
It's a tour de force. It's such an important book, with fantastic characters - a really strong novel ... It keeps us guessing not just who did it, but why they did it, and cements Chris's place in the pantheon of great crime writers. * Elly Griffiths *
The story's characters are compelling and the mystery is evoked with scalpel-like precision * Daily Mail *
This is mystery plotting at its highest level, all the disparate strands forming into a web and then into a knot that tightens around victim, detective and reader * Spectator *
It's only as you're racing through the final tense pages, full of betrayal, revenge and shocking revelations, that you realise the brilliance behind the construction of this utterly compulsive, whipsmart thriller * Sunday Mirror *
A gripping, complex and classy crime novel. * Mail on Sunday YOU Magazine *
Chilling, gripping and exquisitely unpredictable * Daily Record *
Black Widow does its best to evade you at every turn, demanding your full attention * Scotland on Sunday *
Chris Brookmyre has some claim to be the leading satirical novelist currently at work in Britain * Daily Telegraph *
Enthralling and entertaining * Daily Express *
A biting satire, nuanced enough to avoid polemic * Sunday Telegraph *
A briskly paced thriller with a sense of confident contemporary relevance * The List *
Chris Brookmyre does an exceptionally good job . . . making sense of a narrative in which truth and lies are inextricably entwined. The more I read, the more I was hooked * Crime Review *
Black Widow is a stand-out thriller, reminiscent of the best of Nordic Noir but with its own vivid landscape * Renee Knight (author of Disclaimer) *
Tense, intense and quite, quite brilliant * Jenny Colgan *
Has all the verbal and narrative energy of his best work. A pleasing mix of old and new, its country-hopping plot looks back to Grahame Greene and John Buchan, but the pop and media references are bang up-to-date -- John Dugdale * Sunday Times *
One of Brookmyre's most accomplished books... razor sharp * The Big Issue *
'Brookmyre writes beautifully and describes an unfamiliar world vividly and credibly... I was hooked' -- Jessica Mann * Literary Review *
Chris Brookmyre was a journalist before becoming a full-time novelist with the publication of his award-winning debut Quite Ugly One Morning, which established him as one of Britain's leading crime authors. His Jack Parlabane novels have sold more than one million copies in the UK alone, and Black Widow won both the McIlvanney Prize and the Theakston's Old Peculier Crime Novel of the Year award.
GOR008233063
9780349141329
0349141320
Black Widow by Chris Brookmyre
Chris Brookmyre
Jack Parlabane
Used - Very Good
Paperback
Little, Brown Book Group
2017-03-09
512
Long-listed for Theakstons Old Peculier Crime Novel of the Year 2017 (UK) Long-listed for CWA Goldsboro Gold Dagger 2016 (UK) Long-listed for McIlvanney Prize for Scottish Crime Book of the Year 2016 (UK)
Book picture is for illustrative purposes only, actual binding, cover or edition may vary.
This is a used book - there is no escaping the fact it has been read by someone else and it will show signs of wear and previous use. Overall we expect it to be in very good condition, but if you are not entirely satisfied please get in touch with us
Trustpilot