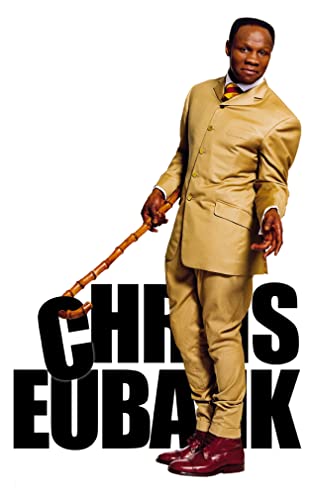 Love him or loathe him, Chris Eubank is one of life's more eccentric personalities who has transcended the world of boxing and established himself as a media celebrity and role model to millions of fans the world over. His story is both gripping and extraordinary.

Love him or loathe him, Chris Eubank is one of life's more eccentric personalities who has transcended the world of boxing and established himself as a media celebrity and role model to millions of fans the world over. His story is both gripping and extraordinary.

He exploded into the public consciousness in November 1990 with a ferocious defeat of Nigel Benn for the WBO middleweight crown. Once crowned champion, he made 19 successful defences of his title and became one of the most talked about boxers of his generation.

But his early life was so very different. Aged 15, Eubank was ejected from the last in a long line of care homes and was living on the streets. His life was a mess of shoplifting, burglary, drink and drugs from which there seemed no escape. In 1981, in a last-ditch attempt to drag himself from the abyss, he relocated to New York with his mother. Here he started boxing and within two years he had won the prestigious Spanish Golden Gloves Amateur title.

Some of the incredible experiences he recalls in his autobiography include: his involvement in a car crash which saw a man die, how he became Lord of the Manor of Brighton, his reaction to Michael Watson's horrific injuries sustained in their 1992 super-middleweight contest and subsequent partial recovery, his views on the `mugs game' from which he previously made his living, his relationship with Nelson Mandela and Muhammad Ali, his passion for his truck, jeeps and motorbikes, and his legendary sartorial elegance and extravagance.

Eubank's life as a `TV celebrity' is even more enigmatic and compelling. He was the subject of a Louis Theroux fly-on-the-wall documentary, he was first to be voted out of the Comic Relief Big Brother house, and is the star of his own television programme At Home with the Eubanks. His story is truly extraordinary.

Chris Eubank is the former WBO middleweight and super-middleweight champion of the world. He is one of the most successful British boxers ever, with a record of 43 wins from 47 bouts. His eccentric dress-sense and engaging personality have made him one of the world's most recognisable sportsmen.

Martin Roach is the owner of IMP, an independent biography and new fiction publishing house. He has written over 65 biographies and has an extensive knowledge of boxing history.

GOR001097169
Chris Eubank: The Autobiography by Chris Eubank
Chris Eubank
Used - Very Good
Paperback
HarperCollins Publishers
2004-07-28
384
0007122322
9780007122325
N/A
Book picture is for illustrative purposes only, actual binding, cover or edition may vary.
This is a used book - there is no escaping the fact it has been read by someone else and it will show signs of wear and previous use. Overall we expect it to be in very good condition, but if you are not entirely satisfied please get in touch with us.