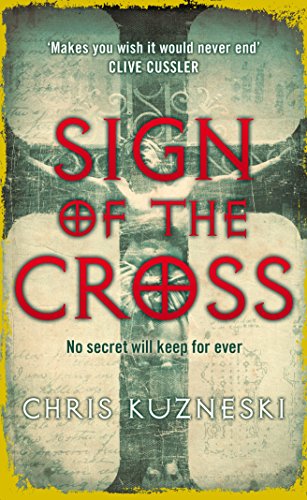 In Stock
£4.49
A Vatican priest is found murdered - nailed to a cross in the shadow of Hamlet's castle. He is the first victim in a killing spree that spans the world. Meanwhile in the Roman Catacombs of Orvieto, an archaeologist uncovers a scroll dating back two thousand years. The scroll holds the key to a secret that will rock the foundations of the Church.
Very Good Good
12 in stock

No secret will keep for ever ...

A Vatican priest is found murdered on the shores of Denmark - nailed to a cross in the shadow of Hamlet's castle. He is the first victim in a vicious killing spree that spans the world. Each horrific murder exactly mirrors the crucifixion of Christ ... Meanwhile, deep in the Roman Catacombs of Orvieto, an archaeologist uncovers an ancient scroll dating back two thousand years. The scroll, he knows, holds the key to a dark and treacherous secret that will rock the very foundations of the Church. But only if he can decipher its lost meanings - and only if he can live long enough to reveal them ...

The enemies of the truth know no law of man ...

Harrowing, but always suspenseful, Sign of the Cross, makes you wish it would never end. * Clive Cussler *
Chris Kuzneski is a remarkable new writer, who completely understands what makes for a good story: action, sex suspense, humour, and great characters. * Nelson DeMille *
A fast-moving adventure of sins and secrets loaded with atmosphere, intrigue, and suspense. -- Steve Berry, author of * The Templar Legacy *
Chris Kuzneski's writing has the same raw power as the early Stephen King * James Patterson *

Chris Kuzneski is the international bestselling author of six novels - The Secret Crown, The Prophecy, The Lost Throne, Sword of God, Sign of the Cross and The Plantation. His thrillers have been published in over twenty languages and are sold in more than forty countries. Chris grew up in Pennsylvania and currently lives on the Gulf Coast of Florida.

GOR000444240
Sign of the Cross by Chris Kuzneski
Chris Kuzneski
Jonathon Payne & David Jones
Used - Very Good
Paperback
Penguin Books Ltd
2007-04-05
624
0141030844
9780141030845
N/A
Book picture is for illustrative purposes only, actual binding, cover or edition may vary.
This is a used book - there is no escaping the fact it has been read by someone else and it will show signs of wear and previous use. Overall we expect it to be in very good condition, but if you are not entirely satisfied please get in touch with us.