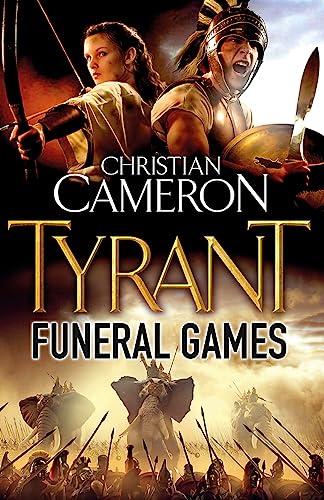 Used Price
£5.19
New RRP £10.99
Free Shipping in the UK
An action-packed tale of betrayal and revenge set amid the war between Alexander the Great's generals and climaxing in the most spectacular battle of the ancient world.
Reviews:
Trustpilot
Very Good Good Well Read

An action-packed tale of betrayal and revenge set amid the war between Alexander the Great's generals and climaxing in the most spectacular battle of the ancient world.

Satyrus and Melitta, twin heirs to a rich kingdom on the Black Sea, become desperate fugitives when their mother, the Scythian warrior-princess Srayanka, is cut down in a savage act of betrayal. Accompanied by their tutor, the Spartan Philokles, they must make a perilous journey west, pursued by ruthless assassins, to find sanctuary with the army of their father's closest friend, Diodorus.

But Diodorus is caught up in the tangled web of alliances, betrayals and intrigue that followed Alexander the Great's death, as his generals fought over the huge empire he had created - and soon the twins will have their first taste of real battle as two Macedonian warlords clash. In this violent and unstable world, they must choose sides carefully, as Antigonus One-Eye, and his brilliant son Demetrius, prepare to take on the might of Ptolemy's Egypt, and the forces gather for the biggest and most spectacular battle the world had ever seen - Gaza.

Christian Cameron is a writer, re-enactor and military historian. He is a veteran of the United States Navy, where he served as both an aviator and an intelligence officer. He is a co-author, with his father Ken Cameron, of the acclaimed Gordon Kent military thriller series, as well as WASHINGTON AND CAESAR, a novel of the American Revolution. He now lives in Toronto with his wife and daughter, where he writes full time.

GOR003021243
Tyrant: Funeral Games by Christian Cameron
Christian Cameron
Tyrant
Used - Very Good
Paperback
Orion Publishing Co
2010-10-28
592
0752883941
9780752883946
N/A
Book picture is for illustrative purposes only, actual binding, cover or edition may vary.
This is a used book - there is no escaping the fact it has been read by someone else and it will show signs of wear and previous use. Overall we expect it to be in very good condition, but if you are not entirely satisfied please get in touch with us.