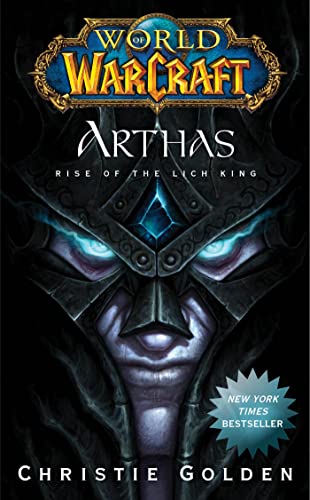 World of Warcraft: Arthas: Rise of the Lich King by Christie Golden

At last! The novel WORLD OF WARCRAFT fans have been clamouring for--the true story behind one of the Warcraft universe's most terrifying villains, ARTHAS THE LICH KING. Author Christie Golden does for Arthas what she once did for the Orc Lord Thrall in the bestselling WARCRAFT: LORD OF THE CLANS, in another epic exploration of one of the key characters from the eleven-million subscriber World of Warcraft massively multiplayer online role-playing game.

"Of all the Warcraft manga, comic books, and novels I have read, Arthas has the most solid, balanced writing and best realized characters....There's much to love about this book....When it ended, I could feel the pangs in my heart as if I was one of the participants." -- WowInsider.com
"This book is an overdosed cocktail of lore and continuity that will numb your senses....I can only say one thing about this. I (beep) love this book!!!" -- Blizzplanet.com

New York Times bestselling and award-winning author Christie Golden has written more than thirty novels and several short stories in the fields of science fiction, fantasy, and horror. Visit her website at: ChristieGolden.com.

GOR001561768
World of Warcraft: Arthas: Rise of the Lich King by Christie Golden
Christie Golden
Used - Very Good
Paperback
Simon & Schuster
2010-03-22
416
143915760X
9781439157602
N/A
Book picture is for illustrative purposes only, actual binding, cover or edition may vary.
This is a used book - there is no escaping the fact it has been read by someone else and it will show signs of wear and previous use. Overall we expect it to be in very good condition, but if you are not entirely satisfied please get in touch with us.