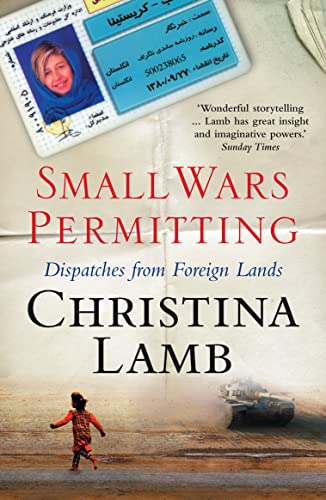 An extraordinary collection of reportage that tells the story of some of the most important world events of the past 16 years, from one of the most talented and intrepid female journalists at work today.

An extraordinary collection of reportage that tells the story of some of the most important world events of the past 16 years, from one of the most talented and intrepid female journalists at work today.

Since leaving England aged 21 with an invitation to a Karachi wedding and a yearning for adventure, Christina Lamb has spent 20 years living out of suitcases, reporting from around the world and becoming one of Britain's most highly regarded journalists. She has won numerous awards, including being named Foreign Correspondent of the Year a remarkable four times.

`Small Wars Permitting' is a collection of her best reportage, following the principal events of the last two decades everywhere from Afghanistan to Zimbabwe. But Lamb's main interest has always been in the untold stories, the people and places others don't visit. Undaunted by danger, disease or despots, she has travelled by canoe through the Amazon rainforest in search of un-contacted Indians, joined a Rio samba school to infiltrate crime rackets behind Carnival and survived a terrifying ambush by Taliban.

No less remarkable are the characters that Lamb meets along the way, from Marsh Arabs who covet Play Stations instead of buffaloes to an Armenian compere for performing dolphins with whom she travelled during the war in Iraq.

Lamb's writing is passionate, powerful and poetic, transforming reportage into literature. Through the stories she tells - and her own development from a self-confessed `war junkie' to a devoted mother - Lamb attempts to comprehend the human consequences of conflict in the countries she has come to know.

`Succeeds because it is so lively.' Sunday Times

`Very readable and gives a good idea of what it is like...to be a front-line correspondent.' Financial Times

`A potent mix of her best articles, memories and some of the impressions she jotted in notebooks and diaries along the way.' Guardian.

`A wonderful retrospective of her dispatches, punctuated with memories of her tenure as a professional stranger in Karachi, Baghdad, Kabul and other danger zones.' Observer

`Hers is the humane face of her hard profession: candid, modest and brave. She is clear-sighted without cynicism, and amazingly unscarred by all she has experienced. This book is a fine testament to her courage and compassion.' Colin Thubron

GOR010582684
Small Wars Permitting: Dispatches from Foreign Lands by Christina Lamb
Christina Lamb
Used - Like New
Paperback
HarperCollins Publishers
2008-01-21
400
0007256892
9780007256891
N/A
Book picture is for illustrative purposes only, actual binding, cover or edition may vary.
The book has been read, but looks new. The book cover has no visible wear, and the dust jacket is included if applicable. No missing or damaged pages, no tears, possible very minimal creasing, no underlining or highlighting of text, and no writing in the margins.