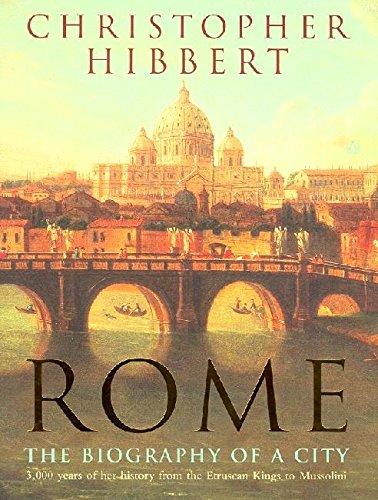 Used Price
£5.99
New RRP £20.00
Free Shipping in the UK
A guide to the use of the avian embryo in studies of vertebrate development. It includes approaches to analysis of the chick genome, gene knock-out studies using RNA interference, morpholinos, and other techniques. It focuses on providing practical guidance, highlighting potentials and pitfalls of key cell biological and embryological techniques.
Reviews:
Trustpilot
Very Good Good Well Read

Rome: The Biography of a City by Christopher Hibbert

This beautifully written, informative study is a portrait, a history and a superb guide book, capturing fully the seductive beauty and the many layered past of the Eternal City. It covers 3,000 years of history from the city's quasi-mythical origins, through the Etruscan kings, the opulent glory of classical Rome, the decadence and decay of the Middle Ages and the beauty and corruption of the Renaissance, to its time at the heart of Mussolini's fascist Italy. Exploring the city's streets and buildings, peopled with popes, gladiators, emperors, noblemen and peasants, this volume details the turbulent and dramatic history of Rome in all its depravity and grandeur.

Christopher Hibbert was born in Leicestershire in 1924 and educated at Radley and Oriel College, Oxford. He served as an infantry officer during the war, was twice wounded and was awarded the Military Cross in 1945. Described by Professor J. H. Plumb as 'a writer of the highest ability' and in the New Statesman as 'a pearl of biographers', he is, in the words of The Times Educational Supplement, 'perhaps the most gifted popular historian we have'.

Christopher Hibbert is a Fellow of the Royal Society of Literature. He is married with two sons and a daughter and lives in Henley-on-Thames.

Part 1: myths, monarchs and republicans; imperial Rome; bread and circuses; catacombs and Christians; infamy and anarchy; saints, tyrants and anti-popes; "the refuge of all the nations"; Renaissance and decadence; patrons and parasites; the sack of Rome. Part 2: recovery and reform; Bernini and the Baroque; il settecento; Napoleonic interlude; the Risorgimento and the Roman question; royal Rome; Roma fascista; epilogue - the eternal city. Part 3: notes on topography, buildings and works of art.

GOR001317128
Rome: The Biography of a City by Christopher Hibbert
Christopher Hibbert
Used - Very Good
Paperback
Penguin Books Ltd
1987-10-15
400
0140070788
9780140070781
N/A
Book picture is for illustrative purposes only, actual binding, cover or edition may vary.
This is a used book - there is no escaping the fact it has been read by someone else and it will show signs of wear and previous use. Overall we expect it to be in very good condition, but if you are not entirely satisfied please get in touch with us.