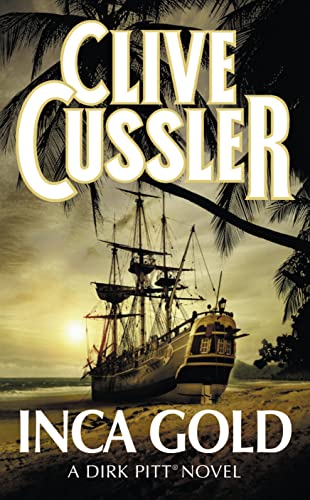 The twelfth hair-raising Dirk Pitt thriller, which sees the adventurer hunt for a fabulous hoard of Inca gold, before the richest prize known to man is lost forever.

The twelfth hair-raising Dirk Pitt thriller, which sees the adventurer hunt for a fabulous hoard of Inca gold, before the richest prize known to man is lost forever.

A call for help from a stricken archaeological expedition brings Dirk Pitt to a sacred well, high in the Andes. There he confronts a band of ruthless art thieves, who plunder ancient sites for their precious artefacts.

But soon Dirk Pitt faces even graver danger, as he searches for a lost Spanish galleon and hunts for a fabulous hoard of Inca gold. And in a desperate race against time, Pitt must track down a sacred site - before the richest prize known to man is lost to the world forever...

`Just about the best storyteller in the business' New York Post

`Clive Cussler is the guy I read' Tom Clancy

Clive Cussler is the author or co-author of a great number of international bestsellers, including the famous Dirk Pitt (R) adventures, such as Havana Storm; the NUMA (R) Files adventures, most recently The Pharaoh's Secret; the Oregon Files, such as The Emperor's Revenge; the Isaac Bell historical thrillers, which began with The Chase; and the recent Fargo Adventures which lastly included The Solomon Curse. He lives in Arizona.

GOR000497308
Inca Gold by Clive Cussler
Clive Cussler
Used - Very Good
Hardback
HarperCollins Publishers
1994-08-03
624
000647909X
9780006479093
N/A
Book picture is for illustrative purposes only, actual binding, cover or edition may vary.
This is a used book - there is no escaping the fact it has been read by someone else and it will show signs of wear and previous use. Overall we expect it to be in very good condition, but if you are not entirely satisfied please get in touch with us.